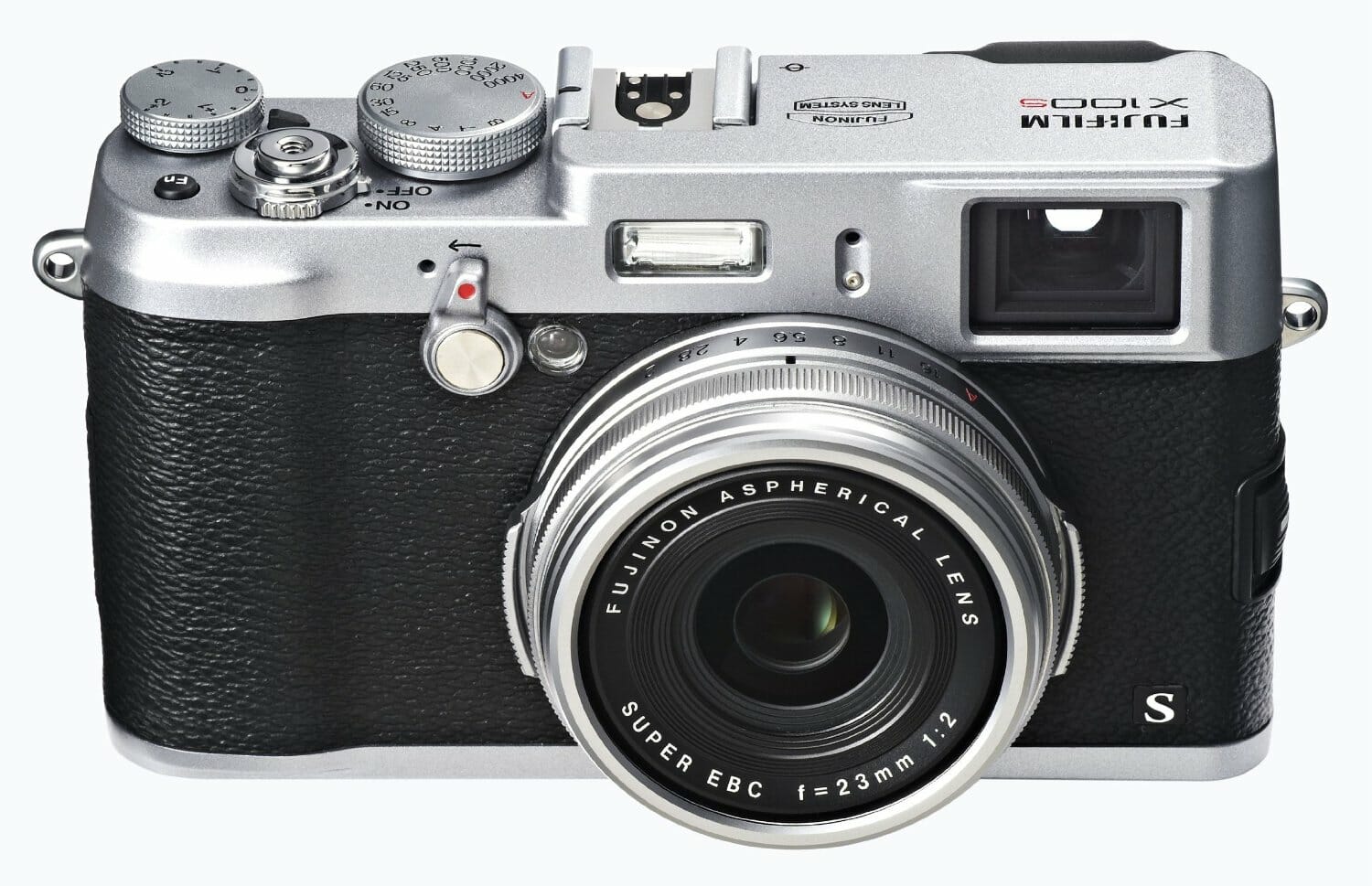 The Fujifilm x100s’ fixed lens, a Fujinon 23mm f/2, is just about as good as it gets for 35mm equivalent focal length lenses (due to the crop factor on APS-C lenses, it has a 35mm field of view).

My experience using this camera has mostly been doing street photography.

The Fuji x100s doesn’t have an interchangeable lens so it’s not for everybody but it’s my preferred way of shooting.

It gives you the option of pretty much completely manual controls, having a manual aperture dial being one of them. The aperture dial feels durable and it locks nicely in place once you’ve chosen an aperture.

It’s a nice option to have all the full-manual controls – it gets you out of the “spray and pray” mindset, where you take a boatload of photos without giving much thought to your compositions.

Shooting in manual slows down your shooting process and makes you think more deliberately about what you’re seeing.

One of the things I’m not a big fan of is the manual focusing of the lens on the Fujifilm x100s. I find the focus ring to not have enough resistance to it.

That’s from it being a focus by wire focusing system rather than analog. It’s kind of like when you put a mountain bike into its highest gear and you pedal your legs as fast as you can but it hardly moves you forward any further.

I feel like it takes too long to get through the lens’ range of focus. This has been improved with firmware but I still think it feels off.

The Fujifilm x100s lens is a conveniently compact size that only slightly sticks out in front of the face of the camera.

The size of the camera as a whole is a big improvement if you’re coming from a DSLR or other large camera. It makes photography more enjoyable not having to lug around big/heavy equipment.

Unfortunately, it’s just a little bit too big to be pocketable.

You can technically get it in your front pants pocket but it’s a tight squeeze. It does fit fine in a jacket or coat pocket.

Having my camera be pocketable is a big deal for me. The smaller the camera, the higher the chance I’ll take it with me.

That said, in certain situations (like if I was shooting street photography in a sketchy area and didn’t want to carry it in my hand anymore) I could put it in my jeans pocket. And if you’re shooting in chilly or cold weather, it fits easily in a jacket or coat pocket.

The weight of the lens on the Fuji x100s has noticeably been kept to a minimum. Compared to using big bulky DSLRs, this lens and body combo balances really well. Even for the small size of the x100s, it feels very light, which is due to its mostly magnesium alloy body.

The camera/lens combination weighs a total of just under one pound, a very manageable weight that allows you to be mobile without weighing you down.

The x100s’s Fujinon 23mm f/2 lens is a very good performer in terms of sharpness. It’s sharp all the way down to f/2 in the center of the frame. That’s a good thing for people who like to shoot portraits wide open.

At f/2 and wider apertures before f/8, the lens has noticeable softness and lack of detail in the corners.

When I shoot street photography during the day, I’m practically always at f/8 or higher. I want the depth of field. And in my case, I’m not doing much pixel peeping and don’t need my photos to be perfect in the corners.

It’s street photography. I’m not expecting to get immaculate files that look like they were shot in a studio. I’m ok with a little grit and character.

For landscape photographers who need as much sharpness and detail as possible, the camera may be a bit of a letdown compared to your standard high-megapixel landscape camera. For display on computers and other devices, it’s plenty though.

The Fuji x100s however, is way smaller and lighter than big DSLRs, so it does have that advantage.

The one real concern is if you’re frequently blowing up your images for large prints. Then the discussion of corner sharpness becomes more reasonable and it needs to be taken into consideration if it’s important to the type of photography you do.

In a traditional sense, this Fuji lens does not deal with flare very well. If you include the sun in your frame it becomes an indistinct blob of light. Not much in the way of sunstars if that’s your thing.

Flare also crops up as colorful strays of light. And you’ll get the outline of the lens’ aperture opening.

With that said, you never really know exactly how flare will turn out in your images until after you’ve taken them. And sometimes you can get some pretty cool effects.

The vignetting (or lack thereof) is really as good as any lens I’ve ever shot. It’s hardly noticeable wide open and improves up until f/4. After that it stays about the same throughout the rest of the aperture range.

The autofocus of the x100s got an upgrade over its predecessor, the x100, in terms of autofocus. But it’s not due to any difference in lens design between the two cameras.

The improvement in autofocus comes from the camera’s newer, larger, 16.3 megapixel X-Trans CMOS II sensor. The larger sensor size obviously helps, but more specifically the increase in speed and accuracy comes from the new phase detection pixels integrated within the new sensor.

The x100 was a capable camera in its own right, at least for when it came it. Even considering its slow autofocus and other quirks.

The x100s has improved autofocus and image quality over the x100.

While the x100s is a good camera, it can still be frustrating at times.

During the day it focuses well. It’s not mind-blowing, but it performs.

But at night, the x100s really struggles to focus and it hunts a lot.

The shame is that when you can get the x100s to lock focus on your subject, the files look great. But it’s really difficult focusing on moving subjects that are cast in shadow or are just outside the reach of any artificial light source like street lamps or whatever.

The workarounds I used were:

If you’re expecting the x100s to focus as well as a DSLR or one of the newer mirrorless cameras, unfortunately, you’re out of luck.

The x100s has good bokeh for a 35mm equivalent lens.

It’s pretty smooth and not distracting.

Because it’s a wide focal length, you won’t get a lot of separation between your subject and background like you would with a longer lens, which is just the reality.

For a 35mm equivalent lens, the bokeh looks pretty good.

When you get up to higher ISOs though, you start to get a waxy look in people’s skin tones. I try to stick below ISO 4000 if I want to process my images in color. At ISO 6400 I think the images from the x100s are best processed in black and white.

Who is this camera for?

The Fujifilm x100s was not made for every type of photography.

It has its little niche that it fits in.

This is where the camera really shines and what it was made for. The Fuji x100s is small, light and unassuming.

I started out shooting street photography with a DSLR but that didn’t last very long – I quickly realized just how much you stick out on the street with a big camera like that.

The x100s really provides all you need for street photography – it gives you great image quality in a stealthy and pretty affordable package.

The Fuji x100s is also great for capturing your everyday life.

You may normally shoot with a big DSLR and huge professional lenses, but what about those times when you just want to take pictures of your kids, your family or hanging out with friends?

Even if your main type of photography requires a different type of camera/lens, having a camera like the x100s allows you to have a camera on you at all times.

If you’re like me, the bigger the camera, the less likely I am to take it with me. The compact size and low weight combined with great image quality makes the Fuji x100s a great companion camera. Having a camera like this on you at all times can really improve your photographic vision.

The fixed focal length of the Fujinon 23mm f2 of the Fuji x100s is obviously a bit limiting, but limitations can be good for your creativity. All photographers have their favorite focal lengths and I’m sure some would disagree with me but for landscape photography I’d say the one must-have focal length is 35mm.

The x100s’s Fujinon 23mm f2 lens provides beautiful, sharp images. The size and weight are kept to really nice, manageable levels that allow you to take the camera with you while you’re on the move. The fact that you can shoot the camera completely manually is really nice.

Last but not least, it’s got a cool retro look to it that is a throwback to older rangefinder cameras. I had it in silver but I think the black actually looks better and draws less attention.

The x100s is indeed a great camera but it has some major limitations. It can barely focus in dark scenes, its menus are kind of annoying, it’s just slightly too big to be truly pocketable, etc.

It’s certainly a quirky little camera that can be frustrating at times. But my opinion is that its positives outweigh its annoying quirks. At this point as I’m updating this article in 2020, you can get this camera for very cheap prices but there are also a lot of other better options that aren’t that much more expensive, including the newer x100 models.