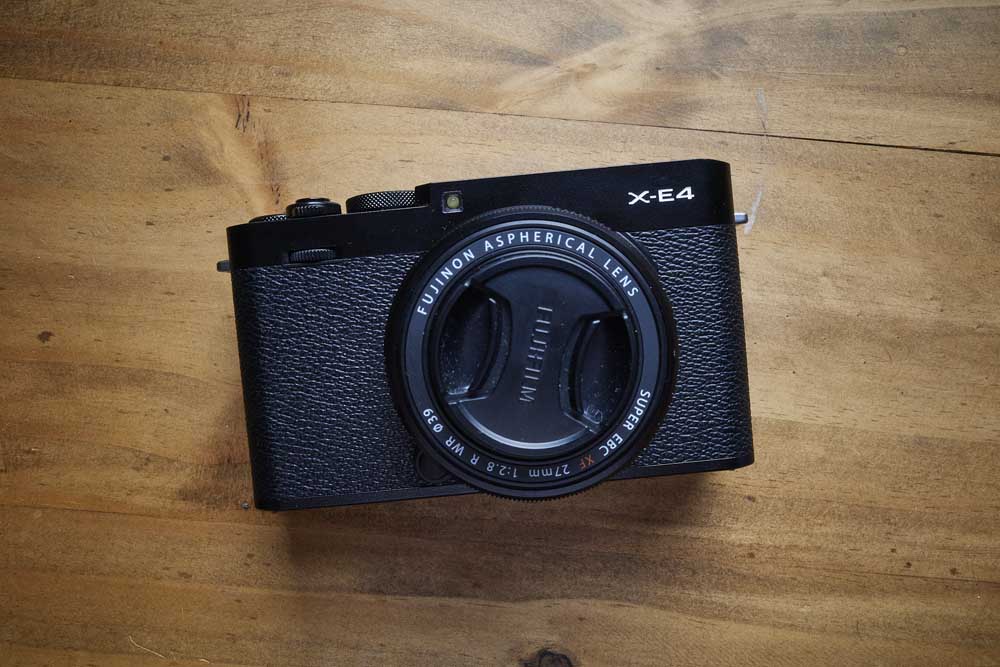 If you’re looking for a capable small camera for street photography, documentary photography, or your everyday carry, the Fujifilm X-E4 is a really satisfying camera to use and definitely worth considering.

The Fujifilm X-E4 is the fourth iteration of Fujifilm’s compact, rangefinder-style APS-C sensor X-E line of cameras. It was released on March 4th of 2021.

This camera has been a bit polarizing among Fujifilm users, as it is more of a minimalist style compared to the X-E3 and other Fujifilm cameras. If you’re coming from the X-E3, you might not like how Fujifilm removed the grip, thumb rest, and the back dial. Personally, I like the minimalist styling of this camera, which I’ll talk about later in this Fujifilm X-E4 review.

I bought this camera for my own street photography and other work and have used it quite a bit, so I hope sharing my experiences with it helps if you’re considering buying it.

This is where things get a bit controversial for this camera, or at least as controversial as a Fujifilm camera can get. I’ve heard what seems like quite a few photographers express disappointment with how Fujifilm included less buttons and dials on the X-E4 compared to the X-E3.

The next big thing that is absent from the X-E4 is a focus mode switch. You can adjust your focus mode in the menu or better yet, access it through the quick menu or map it to one of the swipe functions.

As it’s a rangefinder-style camera, the viewfinder and diopter are in the upper left corner. I wouldn’t say it’s tiny, but the viewfinder is on the small side, which can force you to squint a bit, and may be a downside if you’re coming from a camera with a larger viewfinder. For comparison, the X-Pro3’s viewfinder is a half inch in size, whereas the the X-E4’s is .39-inch. On paper that doesn’t like much of a difference but when you’re looking through a small box you can definitely tell.

So while I would like a larger viewfinder, it wasn’t a deal-breaker for me, especially considering I do a lot of shooting using the back LCD of my cameras these days.

Next to the viewfinder, you have a drive/delete button, play button, and AEL/AFL button. If you want to manually focus, I’ve found that the AEL/AFL is a bit of a stretch to reach with your thumb but I’ve gotten used to it.

Below that is the tilting LCD screen, which may be the coolest feature of the camera. The screen tilts down and up. You can position it so that it faces towards the front of the camera for vlogging or self-portraits.

I think this is the most useful way to implement a tilt screen, especially for street photography, as there are times when I want to shoot something from a low angle in landscape orientation and having this option makes it a lot easier. In order to get the same results without having a tilt screen like this, you have to get down in a much more uncomfortable position and you might have to take a guess as to what your composition is going to be. Since the screen doesn’t tilt horizontally, you can’t do the same in portrait orientation, but I have no problem with that.

I take less photos from a high vantage point for street photography, but it’s nice to have that option. I think it’s a particularly useful feature for wedding and event photography.

Fujifilm did a great job of making this screen flush with the back of the camera and it doesn’t seem to have increased the size of the camera. It feels nice and stable too.

Continuing on the back of the camera, there is a joystick, menu/OK button, and display back button. I’ve heard some photographers say they don’t like how Fujifilm has been removing the D-pads from their cameras, but I think having both a D-pad and a joystick is redundant so I prefer the less crowded user interface with just the joystick.

On the top of the camera, you have your hot shoe, shutter speed dial, Q button, on/off switch + shutter button, exposure compensation dial, and a custom function button that comes with ISO settings as its default function.

You also have access to four custom functions by swiping up, down, left, and right on the screen.

Considering how there’s no built-in grip for the X-E4, I actually think it feels pretty good in the hands, although I did buy Fujifilm’s leather case for it, which makes it more ergonomic in my opinion. I’m liking the leather case but it does seem to beef it up quite a bit and I would like to keep things as small as possible.

I don’t think I would like the size and weight increase of the optional hand grip, so I didn’t get that. I would like to get Fujifilm’s thumb grip for it, but they must be having supply chain issues or something because it’s been months since the camera came out and the thumbs up has been unavailable. I think the thumbs up would make the camera easier to use one-handed.

So far, I’ve been using the camera with a leather neck strap and when I want to take a photo, I bring the camera up with both hands, using my left hand to stabilize the camera and carry most of the weight. Using it like this very comfortable, although it doesn’t really feel great for one-handed operation like what you get with the Ricoh GR cameras in my opinion. Again, I do think this could be improved with the thumb grip. You may have a different experience than me though, especially if you have larger hands.

As far as build quality goes, Fujifilm made the X-E4 with a magnesium alloy body, so for the most part it feels solid and well-made. On the other hand, if you tap on the left side of the front of the camera, it does feel a bit hollow, which just feels strange to me. Also, the material they used for the textured part of the camera feels kind of cheap in my opinion, but that doesn’t affect function obviously and this is a more budget-friendly camera so I expect some less than premium materials to be used.

If you’ve kept up with Fujifilm news and specs, you know that Fujifilm has been using the same sensor in all their cameras for a good few years now. I personally have been getting bored with seeing the same sensor in every APS-C camera while even smartphone sensors are surpassing them in resolution. Just because some smartphones have higher megapixel counts definitely does not mean they have better image quality than a larger-sized APS-C camera, but seeing a bunch of advancements in smartphone camera sensor technology and processing while APS-C stagnates is somewhat concerning.

However, it does sound like we’ll be getting a new camera sensor for the next Fujifilm cameras that come out. Reports from PetaPixel and FujiRumors suggest that the X-E4 will be the last Fujifilm camera to have the dated 26.1-megapixel X-Trans IV sensor that Fujifilm has been using in all their cameras since the Fujifilm X-T3 came out back in 2018. I’m going to take that as good news and hope that the next generation of APS-C camera sensors are going to be a significant bump in resolution if we’re gonna have to keep waiting five years for the next sensor to come out.

Anyway, like the Fujifilm cameras that have come out over the past three years, the X-E4 has good image quality. It captures good detail and keeps noise to a minimum.

It can struggle with certain colors sometimes and I’ve found that it can oversaturate reds and greens, just like in my other Fujifilm camera, the X-T3. I turn Fujifilm’s in-camera noise reduction all the way off, as I think it looks very unnatural and exacerbates the sensor’s color issues.

If you shoot with the X-E4 or any other Fujifilm camera, I highly recommend using Capture One for editing your photos. I just recently switched and wish I would have done it sooner. It handles Fujifilm files significantly better than Lightroom in my opinion.

Here are some of the photos I’ve taken with the Fujifilm X-E4:

The Fujifilm X-E4 has good dynamic range. I noticed though that I was a lot more pleased with the dynamic range when editing in Capture One compared to Lightroom.

In Lightroom, it seems like you have a lot less leeway to adjust your exposure and preserve details and I found that very frustrating. Capture One does an excellent job of accounting for the unique pixel pattern on Fujifilm’s X-Trans sensors, whereas Lightroom just doesn’t I guess. You’d think Lightroom would have made the proper adjustments by now.

One of the nice things about Fujifilm’s cheaper camera models is that they don’t skimp on a lot of the higher-end features of their flagship cameras. Case in point is that the X-E4 uses the same high-end focusing system found in the X-T4 and X-Pro3.

The X-E4 lets you adjust the size of your autofocus point and you can toggle between the full 425 focus points or 117 focus points, which makes more sense to me, so I don’t have to move through so many focus points to get to the one I want. I don’t use most of the focus points anyway though, because I mostly set the camera to manual or single AF and focus and recompose using the center autofocus point.

The camera also has AF-C which does a pretty good job of tracking moving subjects. It also has a face/eye detect feature that works OK, although I think it’s better to use the continuous autofocus mode and not rely on that. The face/eye detect does miss on occasion.

I’ve really been enjoying shooting with the Fujifilm X-E4 and plan on using it for the foreseeable future as a street photography camera along with my Ricoh GR III. I liked it enough to include in my picks for the best Fujifilm cameras for street photography.

I like the X-E4’s compact size, ease of use, the tilt screen, and that it’s an interchangeable lens camera. I’ve been using it with the 23mm f/2 and the 27mm f/2.8. I prefer the 35mm equivalent focal length you get with the 23mm but the compact size of the 27mm pairs really nicely with the X-E4.

And being on the street means you could find yourself in inclement weather at any time. So I just don’t see why a camera that comes in a package perfect for street photography wouldn’t have it. I realize this is a “cheaper” (cheaper compared to other cameras), but it’s still not being sold at a price to scoff at.

How much would it be to put weather sealing in this camera? A hundred, maybe two hundred extra dollars? I would be willing to pay that to protect the camera and not feel like I have to baby it if I get caught in the rain. And it’s not just getting caught in the rain — I would like to be able to actively shoot in the rain because it makes for great pictures.

Other than that though, it’s a great little camera and I’m gonna get a lot of use out of it. I hope you got something out of this Fujifilm X-E4 review and if you get one, I’d love to hear your thoughts on it.

If you’re planning on buying this camera, please consider using the affiliate links below. There’s no extra cost to you and we may receive a commission.