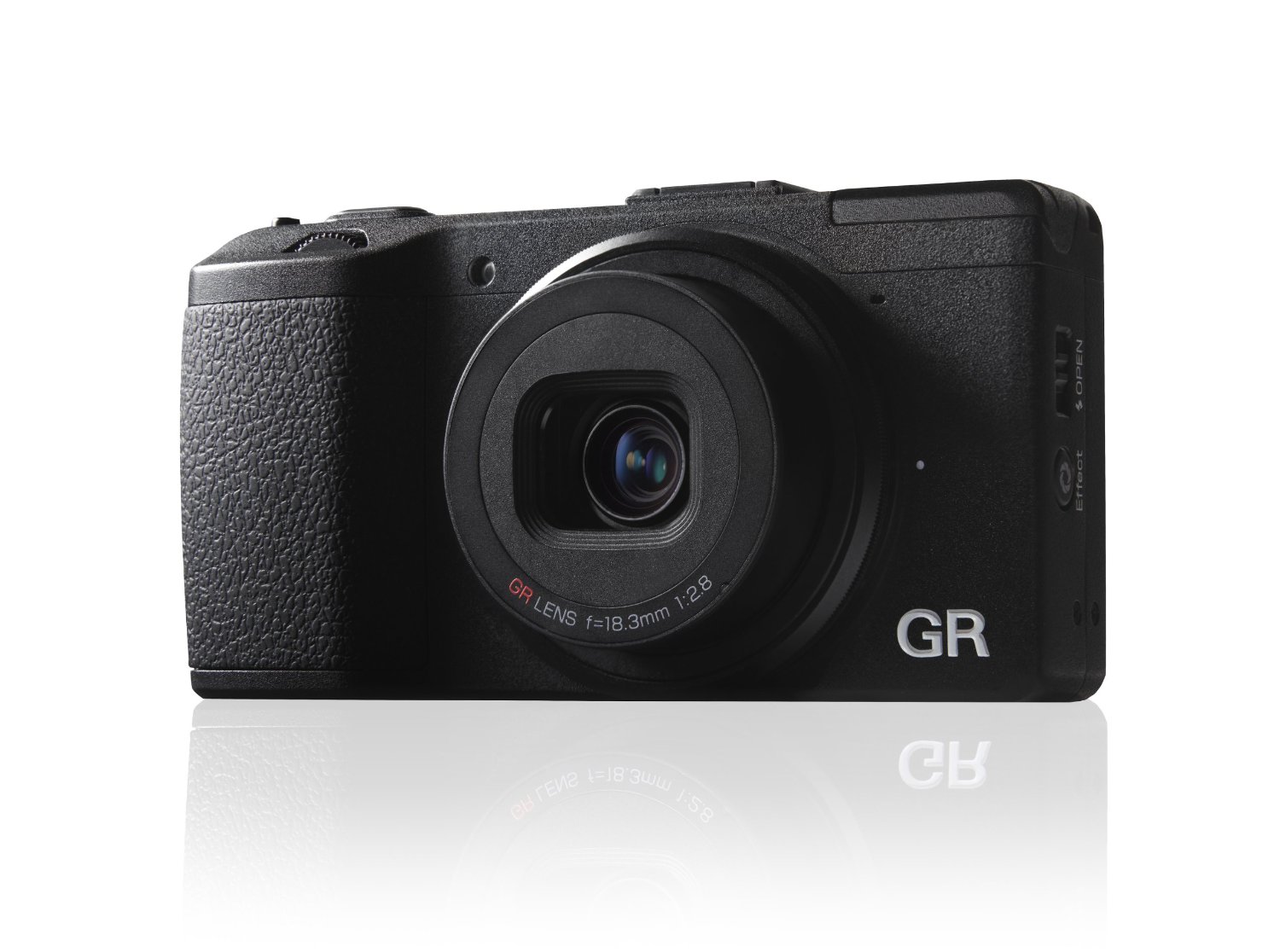 To start off this Ricoh GR review, I think it’s safe to say on behalf of photographers everywhere:

The smaller our camera, the more likely we are to take it with us.

It’s a camera small enough to take literally everywhere with me. Small enough to fit in my jeans pocket — and that’s really without sacrificing much in the way of image quality because of its APSC sensor.

A Little Back Story

First off, I’d just like to start off real quick by addressing the somewhat odd naming move that Ricoh went with on the camera, as they decided to pull a Leica (like how what’s actually the “M10” was just named the ‘M’ ) and dropped the numbering of the Ricoh. So some call it the Ricoh GR V.

Anyway, I, started out shooting in the streets with a DSLR.

The responsiveness of DSLRs are great, but I didn’t shoot with one for long because I quickly realized just how awkward it is to shoot street photography with a big camera like that. Not to mention the bulky/heavy size and weight – which is a burden to carry and makes you stick out like a sore thumb.

So in an effort to cut down on the size/weight/awkward factor of shooting in the streets, I got the highly-praised x100s by Fujifilm. And while that camera was nice and it was leagues ahead of using DSLRs for street photography, it still drove me crazy in a number of ways.

While I don’t want to get into the specifics, as this is a Ricoh GR review, the x100s has several technical quirks that kept me from loving it.

Not to mention, it is a small camera but the Ricoh is even smaller.

The Fuji is just slightly too big to comfortably fit into the pocket of your pants (with jackets/coats it fits just fine).

It may sound nit-picky but I found myself leaving the x100s at home quite a bit, at least if I wasn’t going out for the express purpose of shooting street photography.

So I ended up selling the x100s and now I shoot my street/everyday photography with the Ricoh GR.

I prefer the Ricoh.

When I bought this camera, it was actually after the Ricoh GR’s predecessor, the Ricoh GR II had already come out. The Ricoh GR II was a disappointing release by the company because it’s essentially the exact same camera but has WiFi and a couple other very minor tweaks that don’t add much value to the camera.

I found a good deal on a used Ricoh GR so I just went with that. If you think you would get a lot of use out of WiFi though, then obviously go with the Ricoh GR II.

What normally comes to mind when we think of point and shoot cameras?

The Ricoh GR is not your ordinary point and shoot though.

The casing of the Ricoh GR is made of magnesium alloy, a strong metal but that is also light in weight. It’s one thing that really draws photographers to it; it’s really light but at the same time it feels very sturdy – you don’t feel like you have to baby this camera.

On the other hand, it’s still not like it’s built like a tank, so I’m as careful as I can be with it.

Another thing a lot of photographers love about the Ricoh GR, myself included, is how it feels in the hand. With its slightly raised and rubbery grip and intelligent placement of buttons, it just feels really comfortable to hold.

Size/Weight of the Ricoh GR

As I’ve touched on a little bit before, the size and weight of the Ricoh GR is a big part of what makes it so great.

You can easily and comfortably fit it into the front pocket of your jeans – you don’t have to cram it in like you do if you try to put the x100s in your pocket. And at least for me personally, that really affects how often I take it with me. I take the Ricoh GR with me practically everywhere I go – and it doesn’t feel like a burden.

It also weighs half a pound, which is half the weight of the x100s.

So not only is it compact it’s also very light.

Point and shoots aren’t particularly known for their sharpness, but again, the Ricoh GR V is not your typical point and shoot camera.

There’s some expected softness in the corners when shooting the lens wide open, but stopped down it’s really beautifully sharp.

So I shoot this lens at f/8 through f/11 as much as possible to get everything in focus. The point is, I’m practically never shooting at f/2.8, so the slight corner softness at wider apertures doesn’t matter to me at all.

I’ve always been super impressed with how this camera/lens handles and suppresses chromatic aberration – it’s basically non-existent. Ricoh did a nice job in that regard.

In a similar way to how the Ricoh GR minimizes chromatic aberration, it also keeps distortion to an absolute minimum. In techno sciency-speak, the images produced by the lens have just around 0.1 of wavy barrel distortion.

In normal people speak, that just means that the lens keeps lines straight and images close to what they look like in reality.

Vignetting of the Ricoh GR’s lens is present even when stopped down but it’s not obvious whatsoever so it’s not a concern for me.

I have a love/hate relationship with the autofocus of the Ricoh GR/18.3mm lens combo.

It ranges from super-fast to inaccurate and sluggish.

During the day and in good light, this lens focuses quickly and accurately. Very snappy.

Try to get it to lock focus on a dark night though and it’s not so great. If there’s no light on your subject, forget about it.

Unfortunately, in certain low-light situations, the camera will just hunt back and forth and isn’t able to lock focus.

My current solution is just using snap focus (a great feature the camera has where you set your focus at a preset distance) and just trying to make my best judgment of what is going to fall within what’s in focus.

Here are some other potential solutions:

This doesn’t really merit mentioning because 28mm focal length lenses aren’t made for bokeh purposes, but when shooting at close distances and wide apertures with the Ricoh GR, you do get some pleasant, soft bokeh.

The macro mode of the Ricoh GR is pretty straight-forward and easy to use. With the macro mode on, you can focus from 10cm away. The 28mm field of view is not ideal for macro work but this lens still produces nice results.

With the macro mode, you can shoot small little details, which is actually a great feature to have on the street. You can use it to get really close to your subjects, whether it’s an inanimate object or you’re taking a close-up portrait of a person.

It’s a shame that with the macro mode enabled and in low light is when the lens’ autofocus performs the worst. If your subject isn’t lit well, it tends to hunt back and forth.

At least when you’re shooting macro subjects you’re practically always shooting non-moving things and you can take your time to let the lens lock on.

The crop mode on the Ricoh GR is a pretty cool feature, as it allows you to crop into 35mm or 47mm while shooting – and you get that perspective on the LCD screen while you’re shooting.

The nice thing about it is that when shooting at 35mm, you’re cropping out the softer outer parts of the frame and only getting the absolutely tack sharp parts. Plus you get less vignetting.

The 35mm focal length is one of my favorites and I shot at 35mm for a long time. So maybe that’s why 28mm feels a little bit too wide at times. With 35mm you already have to get pretty close to your subjects to fill the frame and at 28mm you have to get even closer.

The point is just that it’s nice having the 35mm option.

That being said, I rarely use it because I don’t like to lose resolution.

Who would I recommend this camera to?

I love this camera, but it’s definitely not for everyone.

A big reason for that is the fact that you can’t zoom with this lens and you also can’t change lenses. That may bum some people out but it’s exactly what I need.

If you’re looking for a camera that can shoot everything, this really isn’t the camera to do it with. If you want to shoot studio-style portraits, sports, or fast-moving wildlife, this isn’t the camera for that.

But for these applications it’s hard to beat:

The Ricoh GR is an amazing street photography camera. It has a great wide-angle focal length for street photography, it’s small and discreet so you can shoot discreetly without getting in the face of your subjects with a giant camera and it’s amazing that the Ricoh GR APSC sensor fits into its tiny body.

I definitely wouldn’t say it’s the perfect camera, but I will say that this camera and the newer versions that have come out are my favorite street photography cameras.

I think it’s safe to say we’ve all been in the situation where some crazy/awesome/sweet/cute thing has unfolded in front of us but we didn’t have a camera on us to capture the moment.

…Or we just had a crappy cellphone camera with us that couldn’t focus in time or resulted in an image not even worth keeping (cellphone camera image quality is getting way better but is still way behind the Ricoh GR’s IMO).

This is what’s so awesome about the Ricoh GR:

It’s so light and small that you can take it anywhere with you and be ready for those once-in-a-lifetime moments.

No matter what your main type of photography is, it’s great to have a camera with you at all times; it ensures that you’re always practicing, improving and keeping your eye sharp.

And it’s a great camera to have if you just like snapping photos of your life around you, whether it’s photographing your kids, family get-togethers or whatever.

Final Thoughts on the Ricoh GR

With such an unassuming appearance, it’s easy to underestimate this little beast of a camera. But that’s a big reason for why I really like it. I want the appearance of my camera to be as unobtrusive and discreet as possible. That way your subjects are less intimidated by your presence and often don’t even notice you at all.

And the Ricoh GR does just that. It’s sleek black appearance is simple and doesn’t draw attention to itself. It’s not flashy whatsoever, which is just the way I like it.