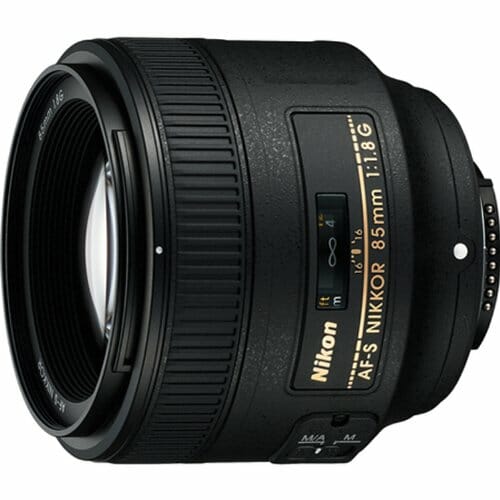 There’s even a few areas where this lens outperforms the three-times-as-expensive Nikkor 85mm f 1.4.

For me, it’s always in my camera bag for my wedding and portrait work. The 85mm focal length is perfect for portraits and you can get some nice shallow depth of field shots with this lens.

There’s obviously other lens options out there that will give you a slightly shallower depth of field, but the Nikon 85mm 1.8 does very well in that department and can produce some very dream-like shallow depth of field shots.

In this Nikon 85mm 1.8 review, I’ll share a few more of my thoughts on why I’ve liked using this lens for professional and personal photography.

Like the other lenses in the G series, the barrel of the 85mm 1.8 Nikon is made of a tough plastic material that feels durable.

I try to handle my lenses with as much care as possible but shit happens and as a wedding photographer, sometimes you’re squeezed into tight spaces or just weird situations in general so I’ve bumped it into tables, walls and floors multiple times.

Through all that, there really aren’t any visible dents or scratches on my Nikon 85 1.8 that I can see.

The lens is quite the trooper as far as durability goes in my experience.

The size of the Nikon 85mm 1.8 G in my opinion balances nicely with most modern DSLRs, although it is on the large side. But it does give you plenty of room to use your free hand to support the weight of the camera and steady it as well.

It’s nice to keep the size as small as possible but some lenses are small to the point where you don’t really have room to use the lens to steady your camera, which isn’t a problem with this lens.

While 595 grams doesn’t feel very heavy on its own, put it on any DSLR and wear it around for an entire day and you start to really feel that weight. Even the 350 grams of the Nikon 85mm 1.8 G combined with a DSLR starts to wear on your shoulders after a long day but at least it keeps weight to a minimum as far as DSLR setups go.

Its moving parts consist of its manual/autofocus switch and focusing ring. The focusing ring of this lens is made of rubber-covered plastic. It feels firm and has a nice half-inch width.

I don’t manual focus much with it but it has a good amount of resistance. It’s an AFS lens, so it has a silent wave AF drive which means that all of the focusing is done within the lens and there are no moving parts on its exterior.

If you’re a wedding photographer or do other photography jobs that require you to be on your feet shooting all day, this lens is fantastic in terms of size and weight.

This lens is very sharp.

In the corners at wider apertures there’s some expected softness but stopped down to f/2.8 and smaller, the lens does really well in terms of sharpness. From its widest aperture to f/5.6, central performance is sharper than the corners.

The sweet spot with this lens is at f/5.6 in regards to sharpness. I frequently shoot with it at wider apertures than f/5.6 though and it’s a very small concern for me, as there’s plenty of sharpness at the widest apertures.

It’s almost non-existent as lateral color fringing – the longitudinal type (fringing behind and in front of the focused point of an image) is where you see it. It basically results in purple weirdness in high contrast areas of your pictures and shouldn’t actually be there.

The bad thing is that this type of chromatic aberration is difficult to remove in post-production; sometimes it’s not fixed by just using the lens profile corrections.

Luckily however, it’s dealt with well and isn’t obvious even when it’s prevalent. In boring technical terms, in the borders and corners it can appear, but is limited to around half a pixel.

There’s very little distortion with this lens. For photographs where straight lines aren’t a major concern, I usually don’t use the lens profiles simply because I like the way the images come out naturally out of camera.

But if distortion is an issue for you for whatever reason the minimal distortion of this lens is further correctable by enabling the lens profile in Lightroom.

But it still does a good job of doing so. The Nikon 85mm 1.8 has only 7 lens elements compared to the 1.4’s nine. The 1.4 has Nano coating as well, making the 1.4 the obvious winner in regards to flare control.

Regardless, the 85mm 1.8 Nikon has very little flare issues even when the sun is included in the frame. Flare can also be used to artistic effect and some photographers would actually prefer the flare that Nano crystal coating mostly takes away.

The vignetting on this lens is predictably heavy at its widest apertures. When closed down a few stops it’s mostly eliminated.

When shooting at wider apertures for low light situations or for the shallow depth of field, the vignetting is easily corrected in Lightroom.

The focusing of the Nikon 85mm 1.8 G is pretty speedy and it’s actually quite a bit faster than the 1.4.

For weddings, I’m often placed in situations that require my camera to be as fast and accurate as possible. For me, shooting a wedding is like shooting a sporting event or any type of photojournalism, as I’m constantly on the move and very rarely will I be stationary and planning/staging shots.

During weddings, you don’t have the luxury of shooting in a controlled environment like you do when shooting portraits. For things like weddings, I want the focus of my cameras to be as fast as possible.

It may be the best Nikon 85mm lens for wedding photography because even though the optics of the are better in most regards, the focus speed and low weight of the 85mm 1.8 Nikon are extremely important for weddings.

The wider the aperture for camera lenses, the more difficult it is for lens manufacturers to make them fast focusing.

But I would like to see a wide aperture 85mm Nikon in the future that focuses as fast as the 70-200 f/2.8. That lens is one of the fastest focusing lenses on the market, but it’s really big, heavy and has a smaller maximum aperture.

Bokeh may be a bit overrated, but why not get good bokeh when you can?

The bokeh of the Nikon 85mm 1.8 G is pretty smooth and pleasing to the eye. It’s well-rounded and has undefined, soft edges at apertures larger than f/5.6. When you’re going for a look with a focus on bokeh, you’re not likely to be using apertures smaller than f/5.6 though.

The bokeh of the 85mm 1.4 is slightly softer (read: better) because of its wider aperture and 9-blade diaphragm.

That being said, the bokeh of the 85mm 1.8 Nikon is great in its own right and the lens is way cheaper.

The Nikon 85 1.8 G’s minimum close focusing distance is .8 meters, or about two and a half feet. I just would like for it to be able to focus closer, not necessarily macro-close, but closer.

This really is a pain in the ass in my opinion.

If you want to get real close to take wedding detail shots or for any kind of macro work, this is not the lens for that.

Two and a half feet is just not close enough to fill your frame with small subjects.

This is actually pretty standard for Nikon 85mm lenses, or any lens company for that matter – the closest focusing distance of the 85mm 1.4 is even longer, for example.

Compared to the 1.4, this lens doesn’t have as good of contrast. The images from the 1.4 are a bit less dull and have more pop to them. Contrast can be added in post, but it’s always better to get things right in-camera.

As far as image quality goes, there are certainly better lenses out there. But for a lot of people, the $500 is already quite a bit of money to drop on a lens. For the 85mm 1.4, for example, is more than THREE times the price of this lens.

And with that lens, you’re not going to get three times better image quality. The images from that lens do have a bit extra special sauce than this lens, for sure. But many photographers can’t justify the price.

If you make you’re living from portrait photography and you have the budget for it, I’d suggest going with the 85mm 1.4. You might as well deliver the best you possibly can to your clients. The Nikon 85mm 1.8 G though, will miss less shots for wedding photographers.

But for hobbyist photographers or pros on a budget, this lens is no slouch and it gives you a ton of value in return for the cost. And in some respects it’s a toss-up between this lens and the 1.4 depending on the type of photography you do.

The slightly faster focusing and significant lighter weight is very attractive for photographers who place a lot of importance on that.

I hope I shed some light on this lens and I hope this Nikon 85mm 1.8 G review has given you enough information to make an informed decision as to whether it would be a good lens to add to your bag.

The Nikon 85mm 1.8 G really is an excellent lens and it’s a great lens for photographers of all levels.