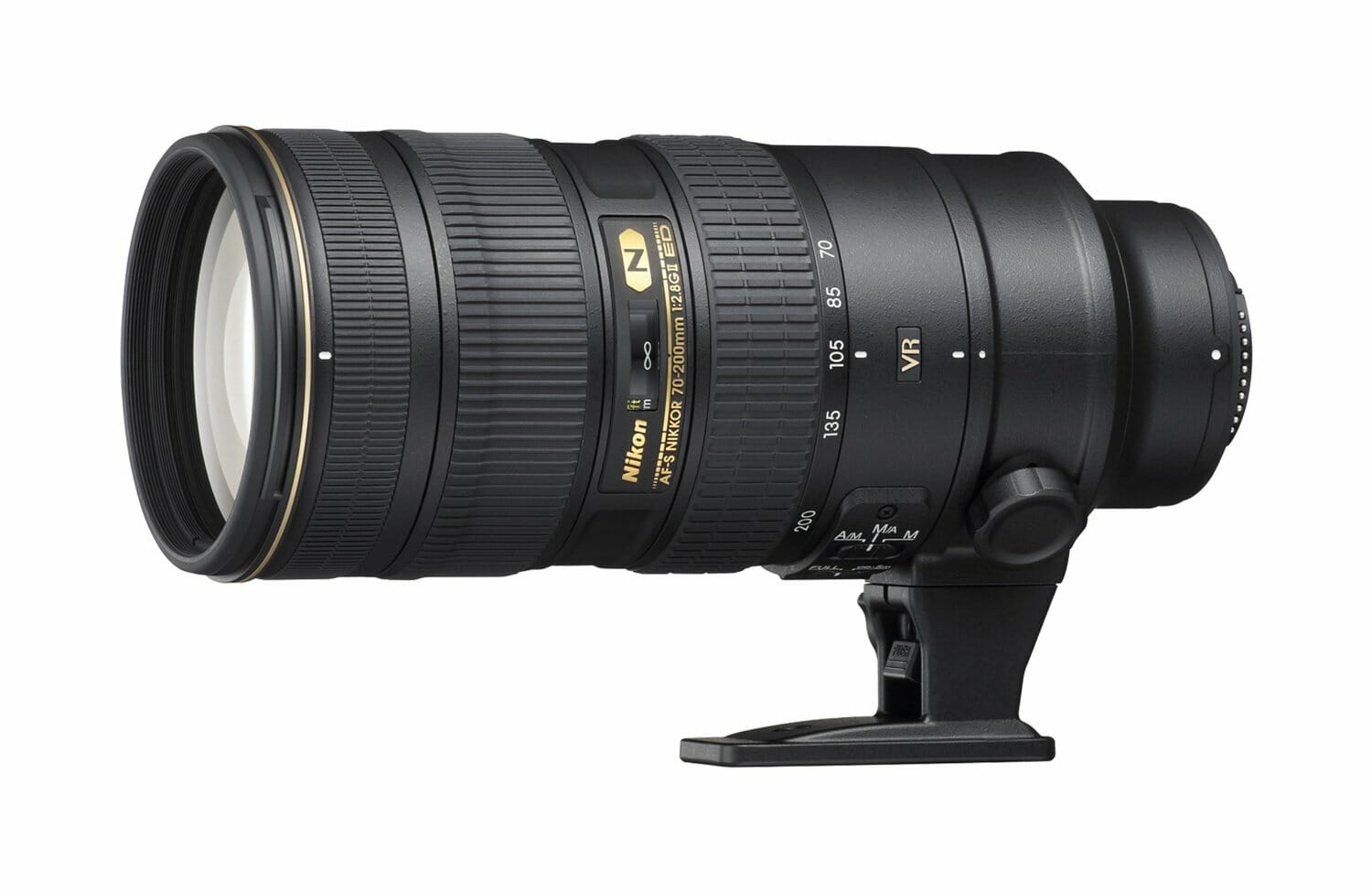 This is my review of the Nikon 70-200mm f/2.8G ED VR II AF-S Nikkor Zoom Lens. While my reviews aren’t super technical, I do try to give a good idea on the optics of lenses but you won’t see sample brick wall pictures in this review.

The Nikon 70 200mm VR II is a pro-grade telephoto zoom lens that produces beautiful images for select types of photography.

It makes up the telephoto end part of the Nikon “holy trinity” of lenses, three zoom lenses that cover a range from wide angle to telephoto.

It’s a nice upgrade in terms of image quality and features over the previous version of this lens, which was called the 70-200mm f/2.8G ED-IF. The Nikon 70 200mm VR II is a serious financial investment but is absolutely worth it for serious enthusiasts and professional photographers.

So if you’re interested in buying this lens, hopefully, this review will give you some insight as to whether it would be a good option for you.

The 70-200 f2.8 Nikon, like the other two zooms that make up the Nikon ‘holy trinity’, is built like a tank and in the hand feels like it could take a serious beating.

That’s because of its all-metal barrel construction. This thing really feels like it was built to be a serious photographic tool.

Not only does the Nikon 70-200 f2.8 feel like it could withstand a lifetime of standard photographic abuse, but it’s also weather-sealed, so you can worry less about it when taking it out in the rain and snow.

Hot weather, cold weather, snow or rain, Nikon’s weather sealing is effective in keeping the Nikon 70-200 safe from the elements. That doesn’t mean you can go and use this lens underwater but it’s nice not having to worry about your equipment when a downpour starts.

The Nikon 70-200 VR II’s focus rings feel well-made and durable. They have a strong resistance, which I think is a good thing so that things aren’t getting bumped around and moved.

I have heard from some photographers that the resistance of the focus and zoom rings starts to loosen up a bit over time but that’s to be expected I guess.

The same goes for the four switches on the barrel of the Nikkor 70-200 – they feel like they’re well-constructed and stay solidly in place. They take a bit of force to switch back and forth. Same thing goes for the tripod collar once you’ve tightened it into place.

Much like the Nikon 24-70 that I previously reviewed, the Nikon 70-200mm VR II is even bigger and heavier than that lens – by quite a bit.

The Nikon 70 200mm VR II is 3.43 x 3.43 x 8.23 inches and even bigger with the included lens hood attached – which is a good idea to protect the front element of the lens. I personally think the size of this lens is obnoxious but if looking like you’re carrying around a bazooka is your thing, then there won’t be any issues.

If there’s one benefit of having such a large lens, it at least makes you look like you’re doing some serious photography business. I don’t think anyone is gonna question your credibility as a photographer with this thing.

The crazy size of the Nikon 70 200mm VR II is matched by its crazy weight. In my review of Nikon’s 24-70 I griped about the heavy weight of that beast of a lens but this one outweighs that one by a landslide.

The upside is that you’re gonna get some big beautiful biceps lugging this bad boy around.

I know photographers who use the Nikon 70-200 f2.8 for wedding photography but I ended up switching for an 85mm/35mm setup because:

1) its large size makes it likely that you’ll bump into someone or something during a hectic wedding day, and

2) the weight of this lens makes it uncomfortable to have strapped around your shoulders all day.

This lens does have its place in wedding photography if you like zooms but personally, I like to use a wide prime and a long prime.

Additionally, because of the weight of the Nikon 70-200mm VR II, I don’t feel comfortable letting it hang off my shoulder without holding it as that puts strain on the lens mount and camera contacts.

Even though the Nikon 70-200 f2.8 feels like it could survive a grenade blast, all those moving parts and internal elements (there’s 21 of them) make them susceptible to certain mechanical failures.

The most common among them being a jammed zoom capability, in which case it has to be sent to Nikon for servicing.

But 70-200 f/2.8 lenses, in general, are loaded with electronics and optical elements and just complicated stuff in general.

They’re thought to be built like military-grade equipment because of the all-metal barrels. But all of that stuff needs to work in conjunction perfectly. As a result, it’s inevitable that some of those moving parts go haywire eventually; regardless of the model or what company manufactured the lens.

The cool thing about the Nikon 70-200mm VR II is its consistent sharpness at all focal lengths. It’s always sharp in the middle of the frame, regardless of focal length or aperture.

At the widest apertures, images taken with this lens have softer corners than in the center of the frame. But when stopped down, even just to f/4, things get a lot sharper.

Even using a teleconverter wide open at f/4(because you lose a few stops by using one), which is common for sports photographers to use in conjunction with a telephoto lens like this, things are very sharp throughout the entire frame.

The Nikon 70-200 VR II does a really good job of preventing chromatic aberration. That’s not to say that you won’t come across some, but in like 99% of cases it’s not even noticeable unless you’re pixel peeping. You can also easily correct it in post.

But again, chromatic aberration with the 70 200 Nikon is kept to such a minimum that it’s not really a factor.

There’s barely any distortion with this lens. The distortion that it does have is easily correctable in post and shouldn’t concern anyone considering buying it.

The older version of the 70 200 f2 8 Nikon was already very good in the flare department. Now that Nano coating has been added to this lens it’s gone from very good to great in terms of dealing with flare.

So reduction of both flare and ghosting are well-controlled.

Vignetting with the Nikon 70-200mm VR II is at its most noticeable at 200mm for some reason.

However, you can really only tell it’s there in unrealistic, testing situations like shooting white walls. When using it for it’s made for, the vignetting does not affect images and if you don’t like how it looks, you can remove it in post.

Autofocus is where this lens is really good.

It’s the fastest focusing Nikon lens on the market as of writing this.

So for shooting dimly-lit wedding reception halls or high school gyms for example, the Nikon 70-200 f2.8 locks onto subjects quickly and doesn’t hunt around trying to acquire focus.

Out of all the Nikon lenses I’ve used, it requires the least amount of contrast to get focus.

The bokeh of the Nikon 70-200mm VR II is round and smooth and the 200mm focal length really lets you separate your subject from the background. Put up against the Nikon 85mm f1.4, which is known for having really smooth bokeh, this lens falls just a little bit short in terms of bokeh quality, but not by far.

Because of the long focal length possibilities, the Nikon 70-200 VR II should probably be in your bag if you shoot Nikon and you do portraits.

The Nikkor 70-200 also is really good for sports photography.

In the majority of sports you need as much reach as possible because you’re going to be seated somewhat far away from the action.

At the long end, the Nikon 70-200 will get you to the action at the other end of the floor if you’re sitting on the baseline of a basketball court, for example. It’s nice to have a teleconverter in these instances as well, but you also have to take into account that when using one you’ll lose some stops of light and also your depth of field will increase.

But it’s an amazing lens for sports.

Landscape photographers can put this lens to really good use as well.

For landscapes, there are instances when you want to be able to isolate a certain part of the landscape while far away and you need a lens like this to do it. Not everything can be done with the wider angle lenses, even though you’ll probably use them more for landscape photography. 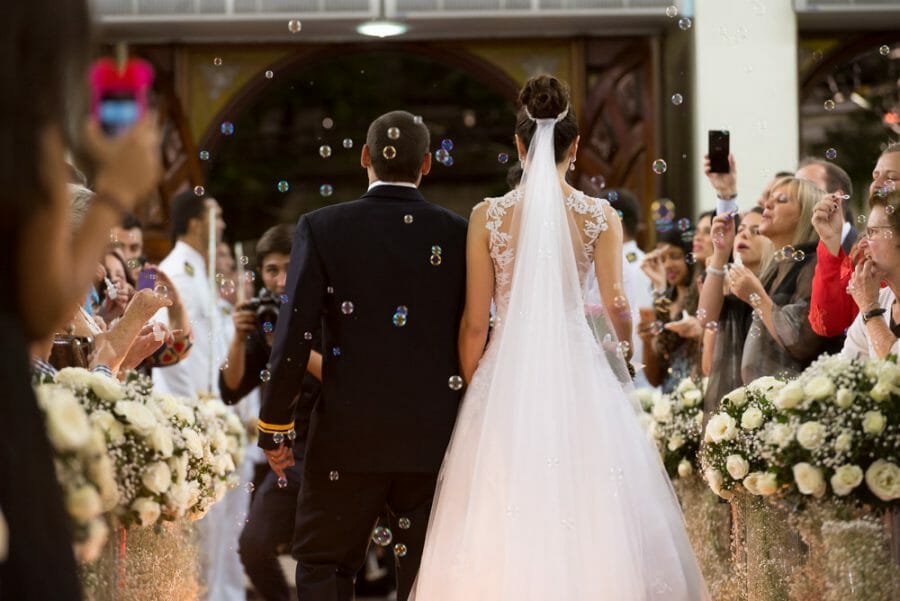 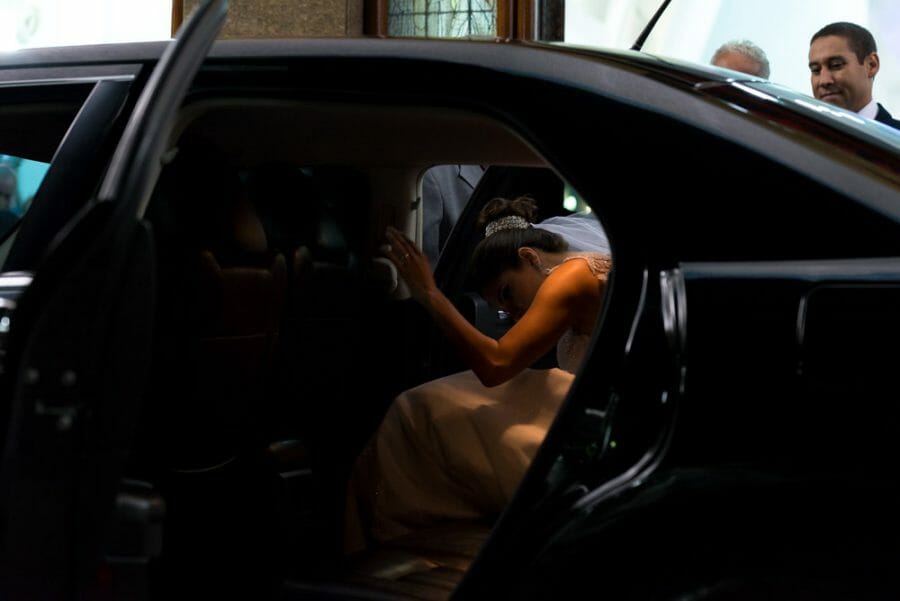 The Nikon 70-200 f/2.8G has great optical performance and a useful long focal range.

It’s very sharp. It has nice colors and bokeh and you don’t have to deal with much of any optical issues like chromatic aberration or ghosting.

It’s an expensive lens but if you do photography as a living or think you may do so in the future, the Nikon 70-200 is worth investing in.

The Nikon 70-200mm VR II is an amazing piece of glass, for sure. It’s the best image quality you can get in its focal range.

The problems of this Nikon 70-200 are in the details. It has incredible image quality but it’s also big and heavy.

If you’re considering adding the Nikon 70-200 f2.8 to your bag, the size and the weight should be taken into consideration.

Because for all its good image quality, it comes in a package that is large and very heavy and it can wear on you. It’s not necessarily a deal-breaker but it is certainly something to think about if you’re considering buying this lens.

For me, I prefer lenses that are smaller and lighter than this but if you need a 70-200 it’s great.

If you liked this review, we have more Nikon gear reviews that may interest you: