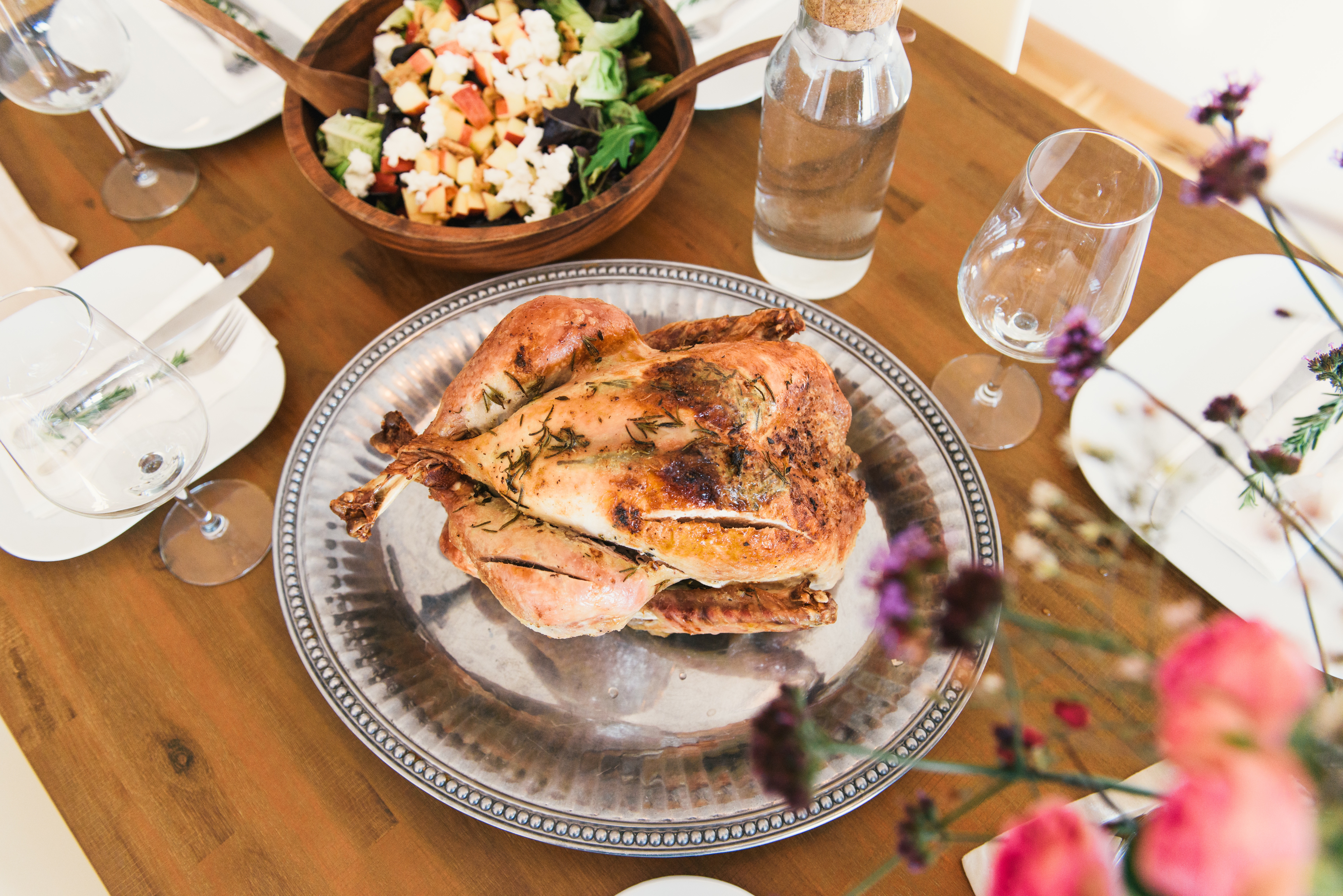 Ah, Thanksgiving – who doesn’t love getting together with family you haven’t seen in a year to argue over politics?

Regardless of your political affiliation, doing Thanksgiving photography is not only a cool way to show how your family grows from year to year but also gives you some good shots to choose form if you like to make Christmas cards.

I understand that you may might already be decked out with more photography gear than you can keep track of.

But if not, I have a couple of quick and simple recommendations:

A DSLR: DSLRs have plenty of competition coming to knock them off the top of the totem pole these days. But in my opinion, they’re still the best option out there for photojournalism-type stuff like Thanksgiving photography.

Mostly because of their good autofocus and high ISO capabilities. Taking candid photos of your friends and family on Thanksgiving Day is a great way to show the day as it really happened rather than staging everything. And to photograph people in natural situations, you need to be able to focus on them quickly and accurately.

Additionally, it’s always nice to have the option of being able to crank up your ISO in low-lit situations. Whether professional or entry level, most modern DSLRs have very capable ISO ranges.

If you’re like me and my family, most of your day will be spent indoors in your home or the home of a family member. That means you’re in somewhat tight spaces.

In order to be able to fit multiple subjects in your frame (and show people interacting and really telling the story of the day), you need something on the wide side. Even 50mm is way too tight for photographing multiple people indoors in my opinion.

I think 35mm is just right. 28mm is a good option though too.

Does your family have a Thanksgiving touch football tradition or something else you do outside?

If so, it’s nice to have a longer lens at your disposal.

An 85mm or 70-200mm lens gets the job done. Their also nice to have around for getting candid photos of friends and family members interacting without having to get so close.

If you like doing things a little more incognito, a longer lens helps. Just keep in mind that in many instances you don’t have the space to use a longer lens indoors.

With hotshoe flashes, whenever you need that extra little pop of light, you can bounce it from the ceiling by pointing it upward. You can also bounce it of any available wall, preferably a white wall or other light-colored wall.

This gives you much softer and diffused light than the ugly light you get when you flash your subjects straight in the face.

For Thanksgiving photography, I like to just use the available light for taking candid shots. But when I take formal portraits, I like to flip up the flash and get a bit more of a staged portrait look.

The last piece of gear I’d recommend for Thanksgiving photography is a tripod.

But let me preface this by saying this:

To be honest, I hate tripods. There I said it haha. They’re big, bulky and make it so you have less mobility when it comes time to take pictures and you’ve got your camera attached to a tripod.

But with that being said, even though I generally hate using tripods and avoid using them whenever possible, there’s one great purpose for having with you on Thanksgiving Day:

Getting yourself in the shot.

You can put your camera on your tripod, set your camera to its self-timer and get in the pictures with your family.

It’s great having the whole family together and being able to take group portraits of everyone, but if you don’t get yourself in some of your photos, you’re going to end up disappointed when you go to look through them later. Get in those photos or you’ll regret it!

There are a ton of special little moments that happen throughout Thanksgiving Day; family members greeting and hugging each other who haven’t seen each other for years, children playing, brothers and sisters having a laugh, playing with pets, etc.

Focus on photographing interactions—people looking at each other and smiling or laughing or even deep in conversation.

To do this you need your camera at the ready—when you see that something is about to happen, bring your camera to your eye. I often find myself looking through my viewfinder with my subjects composed as I want them but waiting until something interesting happens between them.

I may get my subjects framed the way I want them while paying attention to the conversation and then waiting until the punchline of a joke or something to catch people laughing or just having a good time.

And they tell that story much more powerfully than just the cheesy family group portraits.

Now don’t get me wrong—I think group portraits absolutely have a place—I just think they should be a smaller percentage of the pictures you take throughout the day. This is completely subjective, but I probably shoot for about 80% candid shots and the other 20% as formal portraits when doing my Thanksgiving photography.

But if you value formal portraits more than me, absolutely go for it. What makes photography great is that in the end, there are no rules. Shoot for your enjoyment and to make yourself happy.

And speaking of formal portraits, that’s what I’ll be talking about in the next section.

With all the face-stuffing and chit chat, it’s easy to forget to snap some group portraits. At least before the sun sets and you lose light.

If you have a really big group, it’s even more important to take group shots while you still have light outside, as it’s harder to fit everyone in indoors.

Here are some things to keep in mind when doing group portraits for your Thanksgiving photography:

-Start out big and work your way down.

What I mean by that is to get everyone from your extended family together first for some giant group shots (if you’ve got a big family, of course). Then if you have smaller segments of the family shoot them all separately.

Pay Attention to Your Background

This is very dependent on the location you’re at, but pay close attention to your background and try to put everyone in front of a non-busy background. Also be aware of the specific things behind your subjects and try to make sure that there’s nothing behind them that makes it look like something is growing out of their heads.

With big groups you’ve got to kind of take the reins so to speak and direct people where to go. If the group is in front of an ugly or busy background, don’t be afraid to tell people to move to a better spot. Shout if you have to so that everyone can hear you.

But try to keep things light and fun—people have short attention spans when they’re in big groups and are likely to want to get the pictures done quickly and get back to socializing. If you can tell a joke or two, you’ll have people’s attention longer.

Take a Lot of Pictures

Once you get the group situated together, take a BUNCH of shots.

Why do I say this?

The reason being is that taking a lot of pictures gives you a bunch of options to choose from so that you get the best shot. With big groups of people, you’re likely to get people blinking, not smiling or just overall not looking their best. That’s just the nature of photographing big groups—there are just going to be things beyond your control.

By snapping a bunch of shots, in the editing process you have several options to choose from so you can pick the ones where people have their eyes open and are smiling.

This is also where having that tripod comes in handy. What I do is set my camera up, get the group framed the way I want it and set my camera on a self-timer—and set it to take multiple exposures. Not all but most cameras have this feature—cameras are different though so you may have to consult your camera’s manual or do a bit of digging through your menus to figure it out.

One somewhat obvious thing to point out is to know where you’re going to stand in your shot. Decide before you click the shutter button so that you’re not aimlessly wandering and trying to decide on a spot to stand in the picture.

With large groups, my preferred method of lighting is to use available light and do backlighting. Place your subjects between you and the sun so that the sun is behind the group but out of your frame.

Backlighting naturally makes it so that your subjects’ faces are shaded and not in harsh light. It also has the nice effect of lighting around their outlines to separate them from the background.

Know When to Put the Camera Down

While I think that shooting candid, photojournalistic-like photos throughout the day is the best way to really capture the essence of Thanksgiving Day, knowing when to leave the camera in the bag will save you the hassle of wading through unusable snap shots and keep you from pissing off your family.

No one wants their picture taken while they’ve got their face stuffed with grandma’s signature mashed potatoes and gravy.

So when everyone’s eating, I think it’s best to just put the camera away. Photos of people eating mostly turn out unflattering so you save yourself having to go through and delete most of them.

That being said, DO take photos of the food before it’s served

While I avoid taking pictures of my family eating for my Thanksgiving photography, I do take pictures of the food being prepared and the “final product”.

Who doesn’t want to see a picture of a succulent turkey just pulled from a steaming oven?! I’m getting the hungries just thinking about it.

I think the best way to take pictures of Thanksgiving food is actually kind of like doing the group portraits—start out wide and then isolating the smaller things. So take pictures of all the dishes spread out ready to be served or on the dining table just before everyone digs in.

I think it’s a good idea to take pictures up until everyone starts eating. When people are dishing up their plates, I think is still a good time to take pictures. You don’t even have to show the whole person in these pictures; you can just show their hand grabbing food from the table.

Thanksgiving photography is subjective—if you have your own way of doing it then don’t let anyone else tell you you’re doing it wring.

Every family is different ad every photographer is different.  What you like will be different compared to what a lot of people like and that’s ok.

When it comes to Thanksgiving photography, you shouldn’t be in to please anyone other than yourself and your family. So make your pictures reflect that.