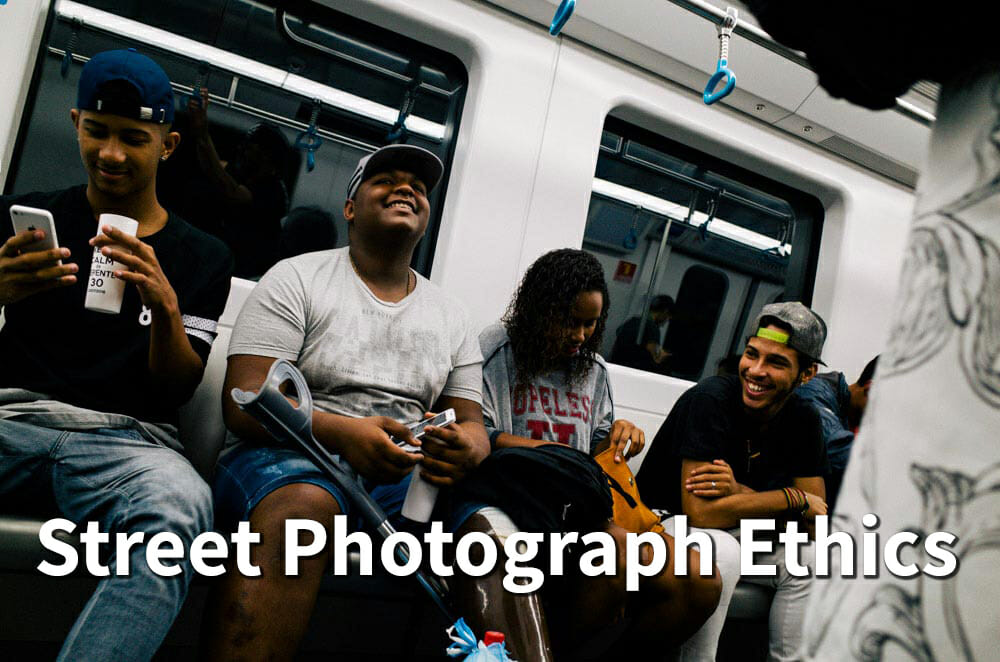 It begs the question: is this an ethical practice? Is it exploitation to photograph people candidly, without their consent in public places?

I don’t think anyone can answer these questions definitively, but I will share some of my thoughts on what it means to be an ethical street photographer.

Street Photography Law is on the Side of the Photographer

In the United States and the majority of countries, street photography is totally legal in public spaces (although there are exceptions and sometimes it’s legal to take photos in a certain country but not to publish them). Regardless, I would recommend having a look at this list if you’re from another country or plan on shooting somewhere else while traveling.

You don’t want any nasty surprises while you’re out shooting, and it’s always good to know the law.

With this all being said, we’re still left with so many potential questions about street photography and ethics.

Are There Things we Should Avoid Shooting in Street Photography?

In my opinion, there are certain ethical boundaries we shouldn’t cross in street photography. I sometimes think it’s appropriate to put the camera down and move on to the next scene.

You may disagree with me and have a different set of street photography ethics, and I think that’s OK, within reason, of course (aka smacking people upside the head with your camera is probably not OK).

What comes to mind for me when I think about what I avoid shooting on the street for ethical reasons is mostly the homeless/destitute.

The though of photographing the homeless without their permission makes me cringe a bit. These are the most disadvantaged people in the world who often get to where they are due to extremely unequal political systems that have failed them and having multiple bad circumstances pile up on them.

Just think for a moment what it would be like to lose your spouse or someone very important to you. You fall into a depression, you lose your job. You get addicted to drugs to escape, and it further compounds your problems.

These are often the types of traumatic experiences people experience that lead them to be living on the streets. If something similar happened to you, do you think you’d like having your photos taken in such a vulnerable state? Maybe not.

That’s why I think it’s appropriate to ask permission from homeless/destitute if you want to photograph them. I think it makes more sense to befriend homeless communities and photograph them from a documentary perspective, rather than in a street photography style, but that’s just me.

I’m not entirely against the idea of incorporating homeless people into candid street photography, but I have yet to see it be done in a meaningful and respectful way.

Also worth mentioning, I think, is that photographing the homeless is easy. That means they’ve been photographed before, and doing what other photographers have already done makes for boring photos.

Having Empathy for your Subjects

When doing street photography, I think it’s important to keep in mind that these are human beings you’re photographing, not objects placed in your line of vision for the purpose of you being able to photograph them.

I’m not saying you need to entertain every crank who loses their mind at you photographing them. I’m just saying that we’re all people and we shouldn’t forget to treat them accordingly.

In other words, try to put yourself in your subjects’ shoes and treat people the way you would like to be treated.

By having this mindset and putting some thought into this helps me to be able to process potential subjects and interactions more clearly while out on the street. By keeping in mind that I want to have at least some modicum of empathy for my subjects helps me decide quicker whether I should be photographing something or not.

Sticking to Your Code of Ethics

I don’t think every street photographer needs a specific code of ethics or anything. I’m not saying to go and carve this into a rock or something.

I just believe that we should try to be respectful of people while doing street photography essentially.

Listen to your conscience and do what you think is right even if it’s difficult (like when you’re dealing with an irate person, for example). By doing so you’ll act more maturely in difficult situations and will have less regrets.

Photographing for the Common Good

Up until this point, I’ve basically just talked about the golden rule, i.e. treat others the way you would like to be treated and be respectful.

Well, what about when someone gets angry with you about you taking their picture? What if even you don’t like having your picture taken and wouldn’t appreciate a street photographer doing it?

For one, I think it’s only fair that you as a photographer get comfortable with having your photo taken. I think that helps relieve some of the guilt you experience from taking street photos of other people, as you’ll feel less hypocritical.

The way I feel towards people who get angry about having their photo taken is pretty much: ‘tough—deal with it’.

I know that sounds harsh and is a big departure from what I was saying in previous sections, but hear me out.

People who are in public places should not expect the same level of privacy they have elsewhere. You are in a public space. You, me or anyone else can be photographed there and it’s completely legal, as I believe it should be.

Someone’s hurt feelings about having their photo taken does not come anywhere near to trumping the societal benefits that we all get from street photography. I’m sure we all feel like dopes every once in awhile just trying to get one good street shot, but street photography is a valuable art form that shows slices of life are points in history. It’s documentation of our world in by freezing moments in time that will never happen again.

Street photography is like history, sociology, and art all rolled up into one.

Frankly, I could not care any less if someone flips out on me for taking their photo. I hope that the overarching theme of my street photos will stand the test of time in spite of petty people who can’t take having their photo taken on the street in stride.

If I could instantaneously communicate a message to people on the street who don’t understand street photography, it would be something like this: you’re out on public. Calm down. You can’t expect the same level of privacy you get when you’re at home.

The ethics of street photography is a very tricky subject because ethics are (at least somewhat) subjective. Although I’m sure there are many people of dubious ethics who use this fact to justify to themselves their bad behavior.