If you’ve been to a wedding as a guest, you might have noticed the wedding photographer using two cameras.

So why do wedding photographers use two cameras?

I’m sure there are plenty of photographers out there who have other reasons for shooting with two cameras, but my two main ones are:

Let’s take a look at each of them.

In wedding photography I like to split my lenses up and have a 35mm on one camera body and an 85mm on another. This allows me to have a lens for close up action, the 35mm, and one for stuff happening further away, the 85mm.

The 35mm focal length is very useful and versatile in its own right. It allows me to get candid shots of multiple subjects at a comfortable distance.

It’s also great for use in hotel rooms for the bride and groom’s ‘making of’s’ and other tight spaces. I actually have trouble getting multiple subjects in my frame even with 50mm lenses in indoor situations, so for me a 35mm lens or wider is a necessity for wedding photography.

I like 28mm focal length lenses so you can use that as your wide angle lens, but 24mm is pushing it I think. Even at 35mm you can get distortion and that obviously gets more pronounced the wider you go.

People want to look their best in their wedding photos and not look fat from distortion obviously so I try to avoid it as much as possible.

Some spaces can even be tight for 35mm but I think it’s a good compromise between being able to fit what you want in your frames and not getting too much distortion.

I use an 85mm lens on my second camera body for shots at a further distance and small details that I want to bring into focus.

I prefer the look of up close images shot with a 35mm lens. That’s just my preference because I think it has a more intimate feel to it.

But shooting up close doesn’t always make sense or is just inappropriate at times, as is often the case during wedding ceremonies. Shooting with a longer lens like an 85mm allows you to capture moments from a distance without disrupting the scene.

I take multiple smaller detail shots, for lack of a better term, throughout a wedding day. By this I mean focusing in on the hands of a bride and groom holding hands, a priest handing off wedding rings to the groom, etc.

I couldn’t have gotten the images below, for example, had it not been for my 85mm lens. Obviously I could technically get similar images with my 35mm, but it just wouldn’t make sense considering how close I’d have to get. 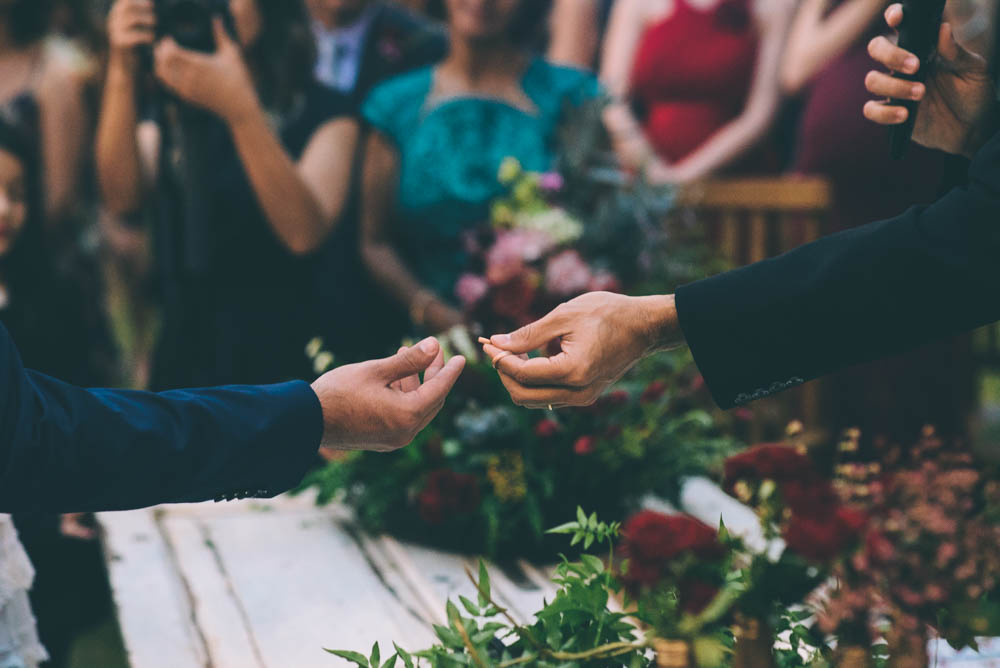 You may be wondering, “well if you want to shoot at two different focal lengths and you have an interchangeable lens camera, why not just switch back and forth between lenses?”

I’ve actually seen at least one wedding photography tutorial by a photographer who does that, so it’s certainly possible but far from the optimal strategy in my opinion.

The reason to use two camera bodies with two separate lenses on them is that you don’t have time to be fumbling around and changing lenses. It doesn’t matter how fast you can change out lenses, it’s just never going to be as fast as switching from one camera hanging from a strap on one side to a camera of a different focal length on the other.

Even if it takes just a few seconds to change from one lens to another, that’s just enough time to miss an important shot. And doing that over multiple weddings or an entire wedding photography adds up to a lot of missed shots.

It’s not just a speed issue either – changing out your lenses frequently in an unpredictable/chaotic environment such as weddings will no doubt lead to higher chances of dropping a lens and/or getting dust on your camera sensor.

Why not just use a zoom lens instead of two cameras for wedding photography?

Using a single zoom lens is also an option for wedding photography. If you’re trying to decide between using two cameras or just one with a zoom lens, I would try out both styles to get first hand experience on which is best for you.

Some photographers prefer one over the other and that’s ultimately a personal choice.

I prefer the two camera setup for a few reasons.

One is that my ideal focal length range isn’t covered by any zoom lenses currently on the market. A 24-70mm zoom lens is the closest I can get to covering the 35mm and 85mm focal lengths I want covered. While 70mm is close, I prefer the look and working distance an 85mm gives you.

You also have to look down at the lens and stop it at 35mm when you want to use that focal length, as it won’t stop zooming out until you get to 24mm. A seemingly minor detail, but an annoyance that slows things down.

Additionally, manufacturers have come a long way with improving zoom lenses recently but there’s no denying that prime lenses are still sharper and have better image quality. Primes also have wider maximum apertures, which allows you to both shoot in lower light and get shallower depth of field.

What you Need to Shoot with Two Cameras

Aside from the obvious things you need (two camera bodies and two lenses), you need a dual camera strap to do this.

You can use two separate camera straps and strap one on top of the other, but I’ve tried it and it’s a real pain trying to do it that way. It’s worth investing in a dual camera strap made specifically for this purpose.

I have one made by CustomSLR but there are several reputable brands out there that make good dual camera straps like BlackRapid. The sharpest looking ones I’ve seen are from HoldFast, who make leather straps.

The choice is yours as to whether to mix and match different camera models but I think it’s a far better idea using the exact same camera bodies just with different lenses. The reason being is that even the slightest difference in button layout on different cameras from the same manufacturer can cause hiccups and slow things down.

The transition between two cameras is even more pronounced if you’re switching from one camera to a completely different type of camera from a different brand. It takes your attention away from what’s important. Your camera should be as close of an extension to your eye as possible, and it’s much easier to get to that point when you have consistency between cameras.

Having a backup camera body is also a very good idea, so shooting weddings this way means ideally having three camera bodies of the same make and model.

But shooting wedding photography with two cameras is not the only way to do it. Everybody’s different and you may find a method that works better for you. The important thing is to test it out and then decide for yourself.