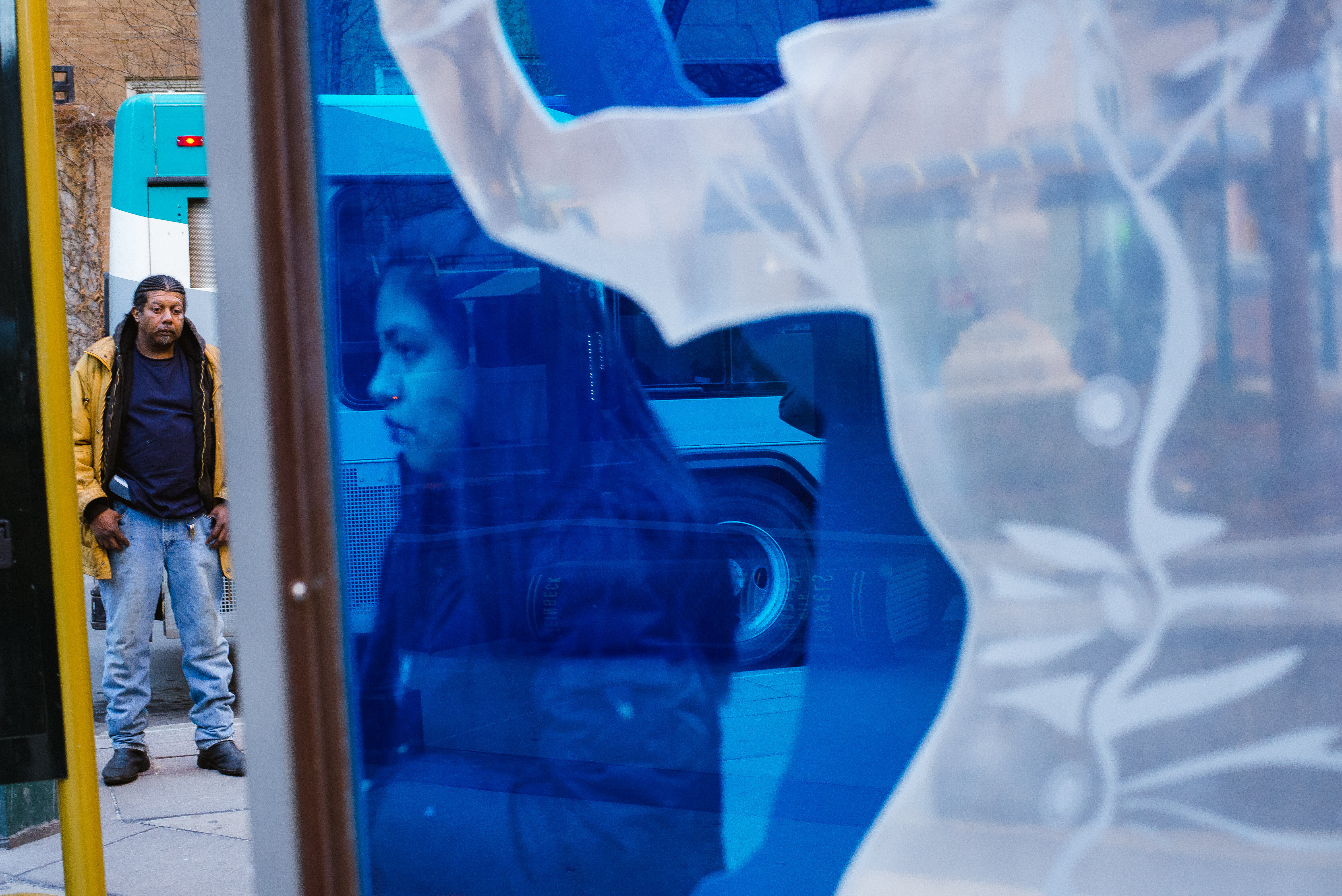 50mm lenses may not be the most used lenses for street photography (at least in today’s day and age), but they are commonly used and this focal length may resonate with you.

It’s really not a focal length you can overlook when it comes to shooting street photography. It’s worth trying out even if you end up not liking it.

After all, some of the legends of street photography shot with 50mm lenses, most notably Henri Cartier-Bresson and Elliott Erwitt.

But does that mean you should shoot with one? I’ll give you my thoughts on 50mm street photography based on my experiences in this article.

Pros of Shooting With a 50mm Lens for Street Photography

The 50mm focal length is by no means a telephoto lens, but you don’t have to get right up on your subjects either. When filling a side of a frame with a subject, I’d say you probably have to be about 2 or 3 meters away.

When it comes to 28mm street photography, you have to be quite a bit closer to fill the frame.

Many photographers probably view 50mm as a ‘Goldilocks’ focal length; not to close and not too far.

This is related to the previous section about the distance between you and your subjects.

If you’ve ever shot with a wide angle lens for street photography, you’ve probably experienced a subject taking notice of you and stopping what they’re doing. Eye contact in street photographs can be powerful, but for the most part, I’d rather have the ability to be invisible and not affect the scene. In other words, I’d prefer to be able to photograph street life as it is and not have my presence influence it.

We’ll never be able to stop ourselves from influencing our surroundings on the street, but with a 50mm lens, you can at least lessen your impact on people’s actions, because they’re less likely to notice you because you’re shooting from further away.

50mm lenses have some of the best image quality you’ll get, partly because they have little to no distortion.

With 50mm street photography, you get a pretty true-to-life representation of things, even in the corners. With some wide angle lenses, you can get some pretty obvious distortion in the corners.

This varies from lens to lens of course, but even with the cheapest of 50mm lenses, distortion is very well controlled.

What is a ‘normal’ view anyway? Well, if we’re talking at what equivalent focal length the human eye sees at, it’s probably around 43mm.

That means that 50mm lenses are not too far off what we see with our eyes, although a little more magnified. What that amounts to in a practical sense is that when you bring your camera to your eye, it’s not a big visual or psychological adjustment to start seeing things at the 50mm focal length.

Although I believe that our brains can adapt to a certain focal length to the point where we know what we’re getting when we bring the camera to our eye, regardless of focal length, it’s probably helpful for some photographers to have a focal length that’s relatively close to what the eye sees.

50mm lenses are basically the most affordable lenses you’ll find. That especially goes for the f/1.8 50mm lenses out there.

Even the high end f/1.4 lenses that are considered “pro” aren’t too bad in price, depending on the lens and brand. The f/1.2 lenses are another story, but f/1.4 and wider aperture lenses are really not very useful for my style of street photography.

In many cases, wide apertures can be helpful for their light gathering capabilities, but I prefer to have as much in focus as possible which you don’t get when using a wide aperture, plus cameras these days have somewhat good high ISO performance.

Anyways, in regards to price: 50mm lenses have simpler engineering demands than other focal lengths and they’re in high demand, so camera manufacturers are able to produce them at scale. As a result, 50mm lenses are cheaper to produce than lenses with more complicated designs.

As I touched on in the previous section, production of 50mm lenses has been going on for a long time. As a result, these companies have had more time to revise and perfect their processes for engineering lenses of the 50mm focal length.

Couple that with the fact that 50mm lenses have simpler designs to produce, and you get lenses that are pretty sharp on average.

If having a wide aperture is important to you (it’s not for me, at least for street photography), then you won’t be disappointed with the 50mm offerings.

While you can see that 50mm lenses have plenty going for them, they also have a number of drawbacks, which we’ll talk about in this section.

The biggest issue that you’ll encounter when doing 50mm street photography are situations in which they’re too tight.

There’s nothing inherently wrong with 50mm and longer focal lengths, but one thing you will find is that there will be instances when you want to capture more of a scene but you don’t have any room to back up. Experiencing this is just far less common when you’re using a 35mm, 28mm or wide lens.

With wider lenses, you have more opportunity to take a shot and crop in than with 50mm lenses.

And if you’re in a tight space, you may not have any room to back up with a 50mm lens, where as with wider lenses you have the option to crop or move forward to get the shots you want.

Makes Photos with a Detached/Far-Away Perspective

This may be the exact effect you’re after, but 50mm lenses and longer tend to have a perspective that is detached from the subject, as if you’re looking at them from a afar.

Many photographers would object to putting this in the ‘cons’ section, and I can’t really blame them considering this is a totally subjective point.

My own personal preference is for lenses between 35mm and 28m because the images they produce give a feeling for that the photographer was right there among the subjects they were photographing.

What you get with 50mm lenses is a bit different. Photographs shot with a 50mm lens have a feeling of detachment, as if the photographer was not there or at least was a participant from a distance.

Focusing based on hyper focal distance is pretty easy with 35mm lenses. You focus at about a meter or 1.5 meters and anything further than that will be in focus.

With 50mm lenses, that’s not really the case. At the hyperfocal distance and at the same apertures, you’ll have less in focus, making it more difficult to get r frame in focus. If you like shallow depth of field for street photography, you’ll be fine with a 50mm lens. I like a shallow depth of field for portraits, but not for street photography (if I could get everything in focus in every shot I would prefer that), so 50mm lenses are not my first choice.

With 28mm and 35mm lenses I can set them to their hyperfocal distance and not think about it much anymore. I can ‘set it and forget it’ and have everything in focus. Not so much with 50mm and longer lenses.

My Personal Take on 50mm Lenses for Street Photography

After starting out on a 50mm lens for street photography for some time, I discovered that it wasn’t the focal length for me.

It’s great for open spaces like when you’re in big, open intersections, but if you’re in tighter quarters, it can often be too tight. I often found myself in situations on the street where I didn’t have the space to back up as far as I wanted to in order to include what I wanted in the frame.

Cartier-Bresson was a photographic genius but he simply had a focal length preference that was a bit different than what I prefer.

On the one hand I appreciate how 50mm lenses are sharp and have little distortion. On the other, I don’t like how they don’t allow you to capture the entire scene in tight spaces.

If you’re thinking about using a 50mm lens and you haven’t bought one yet, the only thing I can really recommend is to try out a 50mm along with 35mm and 28mm lenses before committing to buying.

Ultimately I found that 50mm street photography is not usually what I gravitate towards but many street photographers love the 50mm focal length so it’s worth trying if you haven’t already.

It’s really not important what I or anyone else think about using a particular lens; what’s important is that you find a lens or lenses that you feel comfortable using. It’s going to be you using the lens; not anyone else.

The best way to find that out is really just using a few lenses of different focal lengths, putting them through their paces, and finding out with works best for you. I also talk about finding what works for you in street photography in my street photography tips article.

Here are some other focal lengths for street photography that might interest you: