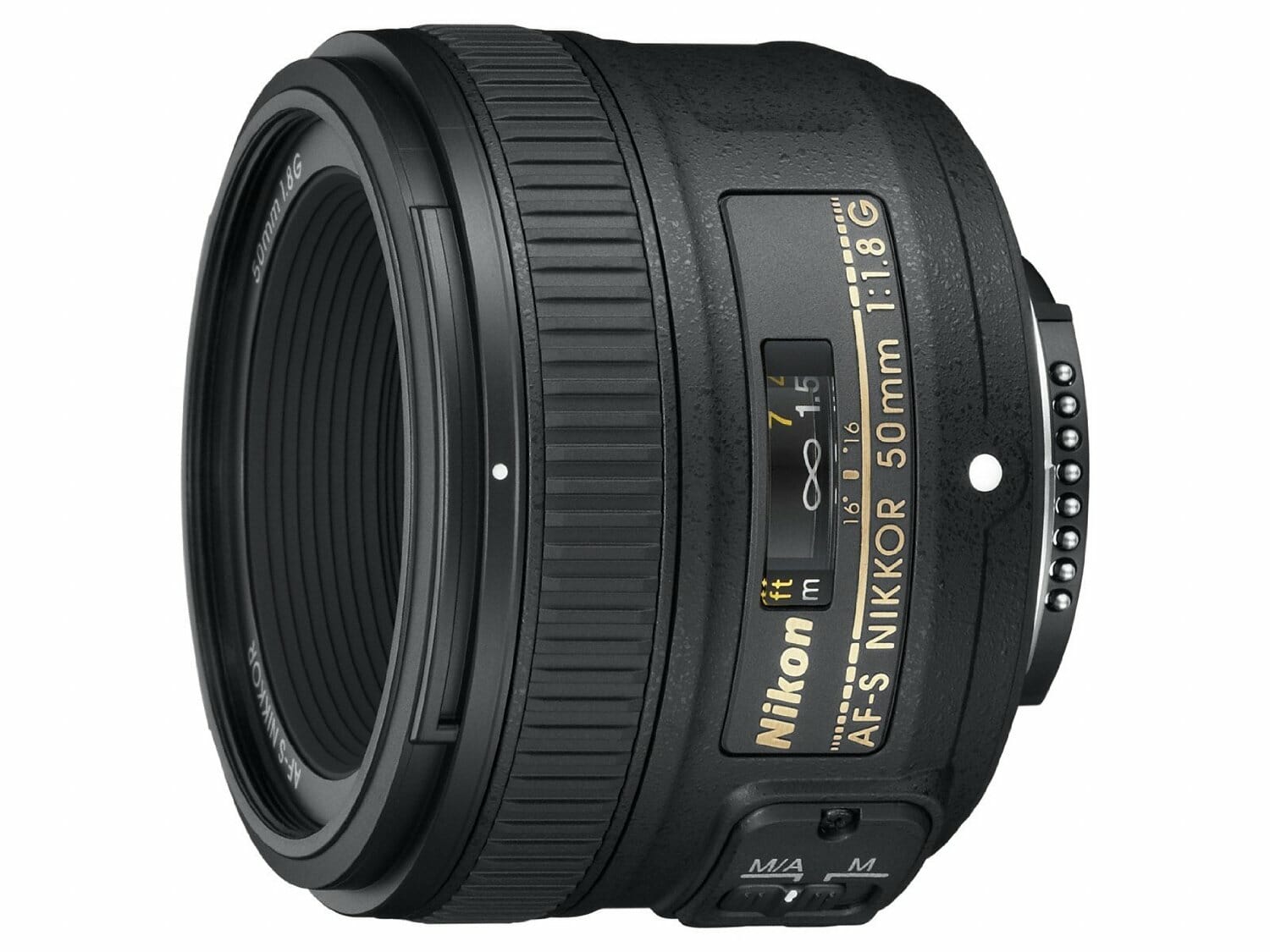 The Nikon 50mm 1.8 G is Nikon’s 50mm option within their growing lineup of budget-friendly/lightweight 1.8G lenses.

These lenses are worthy of professional work, especially if you’re on a budget. The half stop difference means they can’t take in as much light as the 1.4 lenses – which can come in handy in low light situations – and they have more limited shallow depth of field capabilities.

But these “limitations” aren’t deal-breakers, especially considering some of the advantages that the 1.8G’s have over their 1.4 counterparts. The 1.8 lenses are significantly cheaper plus they’re a lot smaller in size and lighter in weight.

The Nikon 50mm 1.8 G is a very capable lens that in many ways outperforms the more expensive f/1.4 G. I’m a really big fan of this line of Nikon lenses and I’ve used them extensively, so my goal with this Nikon 50mm 1.8 g review here is hopefully to help you decide if this lens would be a good addition to your camera bag.

In this Nikon 50mm f/1.8G review, I go over the strengths and weaknesses of this lens.

Although the Nikon 50mm f/1.8G is lightweight and is largely made of plastic (but has a metal lens mount), its construction feels solid.

Its size can feel a bit small but it balances well with most DSLR bodies. The only exception would probably be Nikon’s larger flagship bodies such as the D4 or D5, where the heavy weight of these bodies doesn’t balance well with the size and weight of the this lens. This isn’t a deal breaker and doesn’t affect the function of the camera – just something to keep in mind.

All that aside, this lens balances perfectly on my D600 in both size and weight.

During long days of shooting, it’s a big relief to use a lighter lens like this over some of my heavier ones. There’s also just enough space in between the barrel of the lens and the focus ring to rest your fingers comfortably while shooting.

The focus ring is also placed in an easy-to-reach position on the end of the barrel. It has a nice width and the resistance for focusing is just right.

Some photographers can be somewhat elitist when it comes to the barrel construction of their lenses and think that plastic lens barrels are always inferior to metal ones. While Nikon’s older D-series lenses do have a cheap “plasticky” feel, the plastic barrel on the 50mm f/1.8G feels very durable.

My nikon 50mm 1.8 lens has taken a lot of bumps while working and is still holding up strong – it has very little signs of wear. This lens’ plastic components are also what keeps its weight to a very manageable 185 grams.

The Nikon 50mm 1.8G is not completely weather sealed, but has a rubber gasket designed to keep dust out. This is effective in keeping dust out of both the lens and your camera’s sensor.

This is a nice improvement over the lens’ predecessor, which did not have any type of sealing.

The image quality of the Nikkor 50mm 1.8G is excellent in terms of sharpness, and that’s throughout the whole aperture range of the lens.

At the widest aperture of f/1.8 the lens can be slightly soft in the corners – this is to be expected and is not visibly distracting. Stop down a few stops and images become very sharp from center to corner.

Vignetting is easily correctable in post for the most part but I personally like the look of the vignetting of this lens.

I use it for weddings, portraits and wedding decorations and the vignetting looks very good for this type of photography. If I were using this lens for sports or certain other types of photography I probably wouldn’t be as welcoming of the vignetting.

That being said, the vignetting of this lens at wide apertures is standard for a prime lens of this type.

You can have the sun in the frame and have little to no ghosting, even if you’re not using the lens hood.

These 1.8G lenses have rounded aperture blades which is great for certain aspects of image quality, such as smoother bokeh.

One thing however that they lose a little bit of is cool-looking sun stars when the sun is in your frame. If there’s one thing where the older D lenses outshine the G lenses, it’s that they produce better-looking sun stars. This is usually not a big consideration for most photographers but worth noting.

The bokeh of the Nikon 50mm 1.8 G is good – it’s not the best for a lens of this price range it does very well in the bokeh department.

Most photographers consider good bokeh as circular or at least as rounded as possible. While the bokeh of the 50mm f/1.8 is very well rounded in the center of the frame, when you get out to the corners the bokeh starts looking a bit egg-shaped and pointed at the ends.

I don’t find it very distracting though.

This lens performs really well in terms of focus speed. It actually focuses much faster than the more expensive 50mm f/1.4, and in some instances, almost twice as fast.

With dark subjects, the Nikkor 50mm 1.8 G can have some issues acquiring focus, which is pretty standard. But overall it focuses both very fast and accurate.

The Nikon 50mm 1.8 G is a great performer in terms of build quality and optics.

You get a lot of bang for your buck with this lens.

I think it lacks a certain unique character but does its job very well. What I mean by ‘character’ in this sense is that special quality that some lenses have that you don’t quite know what to put your finger on that just adds that extra special punch to your images.

I think this lens falls just a bit short on that mark in that the images it produces can lack ‘it’.

That’s obviously not a very scientific statement by any means and I’m sure some photographers will disagree with me on that, and that’s OK. There’s always an aspect to lens preference that comes to each individual photographer’s subjective tastes.

That being said, I don’t think that should dissuade anyone from buying the Nikon 50mm 1.8 G. It’s an excellent tool for any photographer to have in their bag whether it’s as a workhorse lens or just as a backup.

This is a good all-around Nikon 50mm lens that can be used for a ton of different applications. It does what it does and very effectively.

But here’s the thing:

I always want to have a 50mm lens in my bag – and shooting all Nikon gear, this is the only one I’d shoot, regardless of price.

This is the best 50mm lens Nikon on the market in my opinion.

It’s sharper AND focuses faster than the 50mm 1.4 and is HALF the price. As a wedding photographer, I need my lenses to focus super-fast, or at least as fast as possible. The extra sharpness also saves some shots that the 1.4 would probably miss.

If you’re a Nikon shooter and looking for a 50mm lens Nikon, I sincerely think you should consider the Nikon 50mm 1.8 G even before the twice as expensive 1.4.