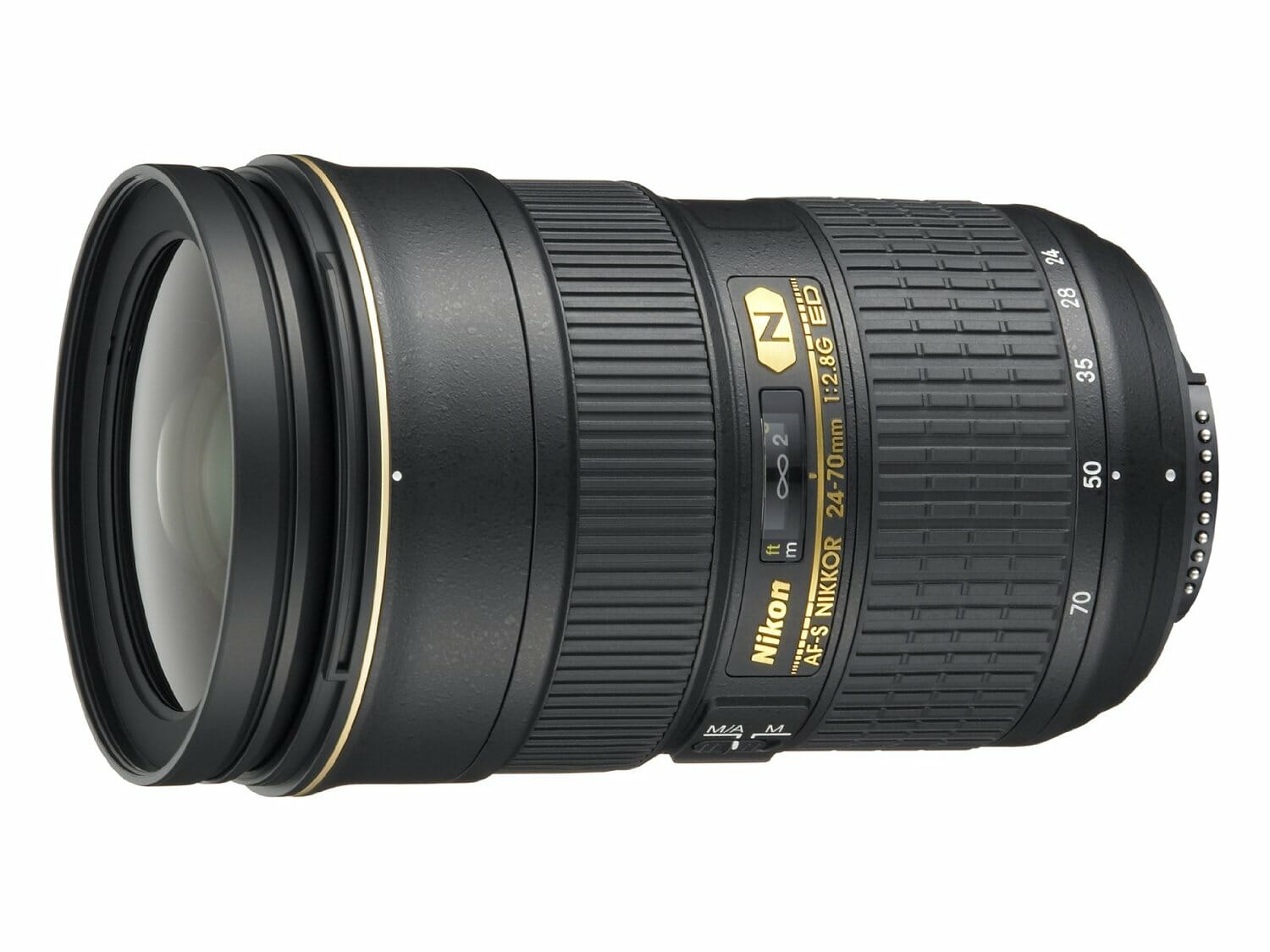 It’s a well-performing lens with a relatively wide aperture of f/2.8 which stays constant throughout the zoom range, i.e. the aperture does not change as you’re zooming in and out with it.

The usefulness of this focal range coupled with the fact that it has really good image quality for a zoom make it a very powerful tool to have in your camera bag. This Nikon 24-70 review will cover all of this lens’ strengths but also its weaknesses.

This lens is worth every penny but it costs about what you’d pay for a car. Maybe a raggedy old beater car, but a car nonetheless.

But if you’re looking for a Nikon zoom lens in this focal range and money is no object then you can’t go wrong with the Nikon 24 70 2.8.

The Nikon 24-70mm feels very solid even though it has more external moving parts than most prime lenses, as it has a zoom ring and its front element moves in and out slightly. The front element moves out when the lens is at its widest and most zoomed-in focal lengths (I’m not sure why the lens is designed this way but it is what it is) and when you’re around the middle of its focal range it retracts.

As I mentioned previously, there’s two things that you can’t avoid when talking about the Nikon 24-70 f2.8 G ED:

Its size and weight.

If you’re photographing people, they’re definitely going to notice it. It will also take up a good deal of room in your camera bag. With the hood on it becomes even larger and starts looking like it could be a big telephoto lens.

Luckily when you’re not using the lens you can reverse the hood and it takes up a little less space.

This lens weighs a whole 1.98 pounds, or close to 900 grams. That may not sound like a ton, but having that much weight strapped around your neck will really wear on your neck, shoulders arms, and hands after a while.

It doesn’t even necessarily feel very heavy if you’re just picking it up but after carrying it around for any extended period of time it gets very tiring. Keep in mind that this lens weighs about as much as many DSLRs so when you combine the two it’s gonna be anywhere from four to five pounds you’re lugging around.

The size and weight of the Nikon 24 70 2.8 is definitely something to take into account – I would certainly consider these drawbacks but that’s really the price to pay for having the wide aperture, focal length and image quality that this lens delivers.

This is a very sharp zoom lens, with a couple of caveats. It’s sharp throughout the entire zoom and aperture range in the middle area of the frame. But at its wider angles and apertures, it has some softness in the corners.

Compared to primes lenses such as Nikon’s 24mm f/1.4 or 28mm f/1.8, this Nikon zoom lens just is not as sharp in the corners. With that said, the Nikon 24 70 2.8 gets a ton sharper when stopped down to f/5.6 and smaller – and that’s throughout the entire focal range.

Between the apertures of f/5.6-f/11 is this lens’ sweet spot, as stopping down further than f/11 starts to result in diffraction.

Even if you’re shooting at f/2.8 and some of the other smaller apertures with the Nikon 24 70 2.8 G, the corner softness is noticeable when pixel peeping but really not that obvious otherwise. 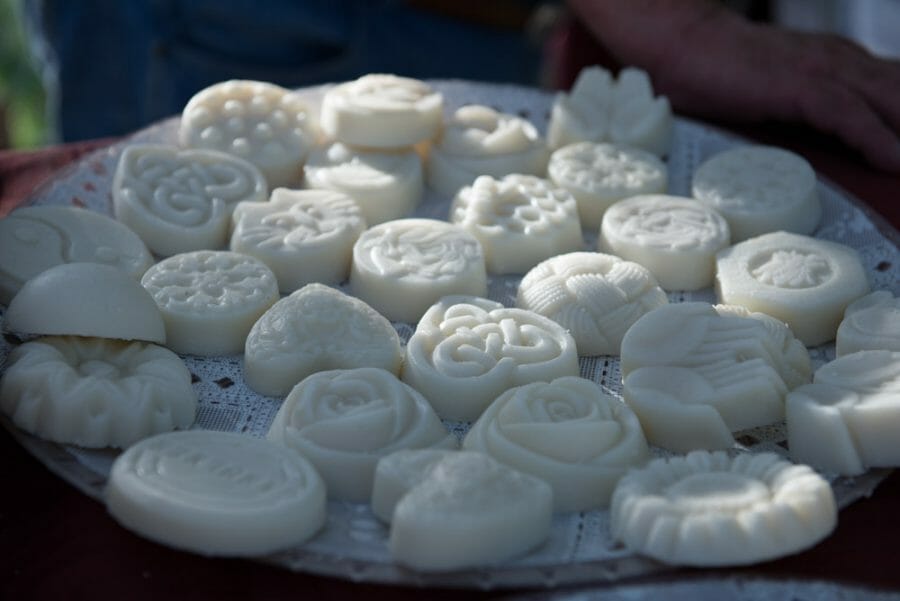 The Nikon 24-70mm f/2.8 G shows some longitudinal chromatic aberration, aka bokeh CA, where the out-of-focus areas of an image in front of or behind the focus point have color fringing. It shows up as greenish-purplish coloring around the edges of high contrast areas that are out-of-focus.

Luckily this is the type of chromatic aberration that is easily fixable in post.

The big gold ‘N’ plastered on the barrel of the Nikon 24-70mm indicates that it’s coated with Nikon’s Nano Crystal Coating, which is applied to certain glass elements of a lens to reduce ghosting and flare. And to think, I always thought that big ‘N’ stood for ‘Nice’ lens!

The lens does a great job of minimizing ghosting and flare but it’s not perfect.

If you include the sun in your frame you will likely see minor flare and sometimes very noticeable ghosting. I think ghosting and flare can be fine when used as a creative element of your photographs so I don’t think it’s a big deal.

If you use the hood of the Nikon 24-70, you will see a large reduction in both the amount of ghosting and flare. Use the lens hood and don’t include the sun in your frame and the flare is reduced pretty much entirely.

Due to the rounded aperture blades of the Nikon 24-70mm, you won’t get those sun stars you get when using older classic lenses, but that’s one of the trade-offs for getting smoother bokeh.

But overall, the Nikon 24 70 2.8 deals very well with bright-lit situations.

Light falloff is expected with a Nikon zoom lens of this type at the widest focal lengths and this lens deals with it very impressively. Vignetting at 24mm is notably visible at wider apertures but stopped down past f/5.6 and the vignetting disappears.

For those who don’t know, it should also be noted that this vignetting is easily correctable in Lightroom by going to Lens Corrections > Profile > and then checking the ‘Enable Profile Corrections’ box.

The autofocus of this lens is where it really shines.

It’s very fast — one of the fastest focusing lenses I’ve personally used. Even in very low light situations, this lens accurately hits focus. There’s little to no hunting — it just focuses where you want it to go the vast majority of the time and very quickly.

You can put it in the most challenging of settings, even in a candlelit room, focus on something with very little contrast and it’ll still lock focus. Most lenses need a large amount of contrast to be able to lock into focus and it feels like this lens doesn’t need as much.

If Nikon could put the focusing ability of the Nikon 24 70 2.8 in some of their f/1.4 prime lenses that would be great. But I think due to the way those wider aperture primes are designed, it’s harder to get them to focus as fast as a Nikon zoom lens with an aperture of “only” f/2.8.

In terms of autofocus, this lens is probably second only to Nikon’s 70-200.

The bokeh of the Nikon 24 70mm is decent but not particularly amazing.

It doesn’t offer the creamy smooth bokeh of Nikon’s 85mm lenses, for example. The Nikon 24-70’s f/2.8 constant aperture is large for Nikon zoom lenses but it still does not have the same subject-isolating capabilities that the wider f/1.4 lenses have.

Due to its aspherical element, the bokeh of the Nikon 24 70 2.8 can have some harsh dark outlines that aren’t necessarily distracting, but it’s just not as smooth as the bokeh balls of other lenses more traditionally known for portraiture.

As far as portraiture goes, I would buy this lens expecting good results but there are better options for that specific purpose.

That’s not to say that you can’t use this lens for shooting portraits.

It’s just that with portraiture, the ideal focal length is longer than 70mm to compress the image and the ideal aperture is preferably larger than f/2.8. With longer focal lengths and wider apertures you get better subject isolation and bokeh. You won’t always want to shoot wide open for subject isolation when it comes to portraits but it’s nice to have that option.

I would not hesitate to use this lens for portraiture. But I think the best use of the Nikon 24-70 is to use it for environmental portraits, where you’re not just showing the subject but also including their surroundings.

As I’ve mentioned, the size and weight of this lens are its biggest limitations. The lens really is big, bulky, and cumbersome, which, when I owned it, made me want to use it less, or at least reserve it for specific instances.

I would definitely take the large size and heavy weight of this Nikon zoom lens into consideration if you’re thinking about buying it.

The other con that comes to mind is the 24 70mm Nikon’s corner softness at its wider focal lengths, which as I covered before, is not that big of a deal in my opinion.

Who is this Nikon Zoom Lens for?

I would first recommend the Nikon 24 70mm to landscape photographers.

A lot of photographers get into landscape photography thinking that it’s all about going as wide as you can go. And while lenses like Nikon’s 14-24mm are amazing lenses, sometimes you want to include less in your frame than the 14-24 allows and the 24-70mm range is perfect for those times.

The other ‘holy trinity’ lens is also nice to have for that extra reach when you need it (and that focal range does actually come in handy for landscape photography.

This lens is also nice to have for portrait photographers. Specifically for environmental portraits.

It’s an excellent lens for sports photography, especially for basketball for example, where you’re likely to be seated on the baseline and you can’t move from that spot.

Being able to zoom between 24 and 70mm lets you get the best focal length possible in that type of situation. The fast focus of the Nikon 24-70 is exactly what you need for fast-moving sports subjects as well.

It can really be used for a lot of the wedding day: getting ready, the ceremony, details and the reception can all be shot with this lens. I don’t use this lens anymore for weddings; instead, I use two camera bodies and an 85mm and 35mm lens on either side.

But I would have no problem shooting an entire wedding with only one camera body and this zoom lens. What I would do is switch back and forth all the way from 24mm for shots when I’m up close to the action and zoom to 70mm when I’m further away or I want to zoom in on details, such as a priest handing the bride or groom their rings.

If you shoot Nikon gear, because of the versatility of this lens, any photographer would benefit from having it, as long as you have the budget. There are just so many uses for this lens. Even just puttering around your house or neighborhood you can find a bunch of ways to make use of it.

Just keep in mind that the lens is far from small or light.

The NIKKOR 24-70mm f/2.8G ED is an impressive feat of engineering by Nikon. Its wide range makes it really practical and it can take a lot of abuse because of its durable build quality.

It can produce beautiful, vibrant images that jump out at you. It’s very sharp. It’s a great all-around lens that will perform in almost any situation you put it in. As far as versatility goes, it’s hard to beat.