Your choice of aperture for street photography is one of the main elements that will determine the look and feel of your images. That’s because it affects your depth of field or how much of your photo is in focus.

Having creative control over my field is important as a street photographer, so choosing the correct aperture is necessary.

But what is the best aperture for street photography, and is there really a single best one? I give my detailed thoughts on it in this article.

A Primer/Reminder on Aperture for New Street Photographers

Aperture in photography is one of the three settings that make up the exposure triangle, along with shutter speed and ISO. Aperture refers to the opening of a lens’ diaphragm, which allows light to enter the camera.

The main thing you want to internalize about aperture is how it changes depth of field as you make it bigger and smaller.

The larger the aperture opening you use, the less depth of field you’ll get, i.e., more will be out of focus. This is how portrait photographers get their subject in focus, and the background is blurry, also referred to as ‘bokeh.’

The smaller the aperture, the more depth of field you’ll get. In other words, more will be in focus in your frame.

This is the more standard approach to street photography: to have everything in focus as much as possible.

Regardless of which aperture size you use, there are some caveats. For one, with many lenses, the closer you are to shooting your lens wide open, the softer your images will be. Likewise, the more you stop down your lens, the more diffraction becomes an issue, worsening your image quality.

So What’s The Best Aperture for Street Photography?

This is totally subjective, but in my opinion, the best aperture for street photography is f/8.

Here’s why I think that.

The number one thing I’m looking for when deciding on what aperture to use for street photography is if it will allow me to get everything in focus (or close to it). For me, street photography is all about showing the scene and telling a story through the interaction between subjects and the environment. Shooting at f/8 allows you to get that deep depth of field because it’s a relatively small aperture.

f/8 is also not too small that it causes issues with your other camera settings (at least not during the day). For example, I usually want to avoid motion blur from shooting at too slow of a shutter speed and the degraded image quality you get using a very high ISO. You would run into these issues more if you were to shoot at, say, f/22.

I like shooting at apertures smaller than f/8, too, usually to f/11. f/11 is great too and has the added benefit of creating an even deeper depth of field than f/8. The only issue is that with many lenses, diffraction starts to set in at apertures smaller than f/8. Diffraction occurs when shooting at smaller apertures, and it degrades your image quality and results in loss of detail.

In reality, there is no true best aperture for street photography because it will vary from one photographer to another. It’s common in street photography to shoot with smaller apertures to get everything in focus, but it’s not a rule, and it’s not a necessity. If you prefer shooting at f/5.6, f/4, or even wide open, that’s your call. The important thing is to experiment and study the work of great street photographers to know what style you like and choose your aperture accordingly.

Best Aperture for Street Photography During the Day Vs. at Night

During the day, when there’s lots of light, you can pretty much shoot at whatever aperture you want. At night though, you may be forced to open up your aperture just to get enough light into the camera for an exposure. So basically, even if you want to shoot at smaller apertures like f/8 that you’re always able to use during the day, you have to make compromises at night. As a result, the apertures you use during the day may be wildly different than what you end up using at night.

When doing night street photography, you may be able to have enough light to open up your aperture and shoot at something like f/4 so that you at least have some depth of field to your images. However, there will be times when it’s really dark, and you basically have to extend your camera to its limits by shooting your lens wide open. You may even need to crank up your ISO to its max and shoot at a pretty slow shutter speed, like 1/125s or even slower.

The aperture you use at night is very dependent on how much available light there is, and sometimes you just have to make adjustments on the fly.

Why Street Photographers Use Deep Depth of Field

Street photography is all about freezing a real moment in time. Life on the street can be dirty, gritty, and full of surprises. I’m not looking for an airbrushed look like they do with portraits; I’m looking to show real life.

So if you want to shoot street photography like the big boys, try shooting at f/8 or smaller.

Even though I prefer smaller apertures, and I highly recommend shooting street photography with a lot of depth of field, that doesn’t mean you have to. You may prefer shallow depth of field or maybe just using it selectively for specific shots. Experimenting with various apertures and finding which ones you like most is a good way to find out what works best for you.

You’ll also learn more about the technical aspects of shooting street photography. For example, you’ll learn how to control the amount of blur in your photos by changing your aperture size. Experimenting with aperture size in manual or aperture priority mode for street photography will help you understand exposure better overall. In addition, it’ll help you make adjustments faster when you’re shooting at night, and you can’t use the same settings as during the day.

The best aperture for street photography is really whatever one you like best. It really comes down to personal preference and the aesthetic you prefer for your photos. The main thing to keep in mind during the day when you have more aperture options is that wider apertures result in less depth of field; smaller apertures give you more depth of field.

Sometimes, like when you’re shooting in low light conditions, you may be forced to compromise and shoot at a wider aperture than you’d normally prefer.

During the day, I shoot a lot at f/8. At night, I tend to play it by ear and shoot anywhere from f/5.6 to wide open, depending on the lighting conditions.

I hope this helps when choosing the best aperture for your street photography. 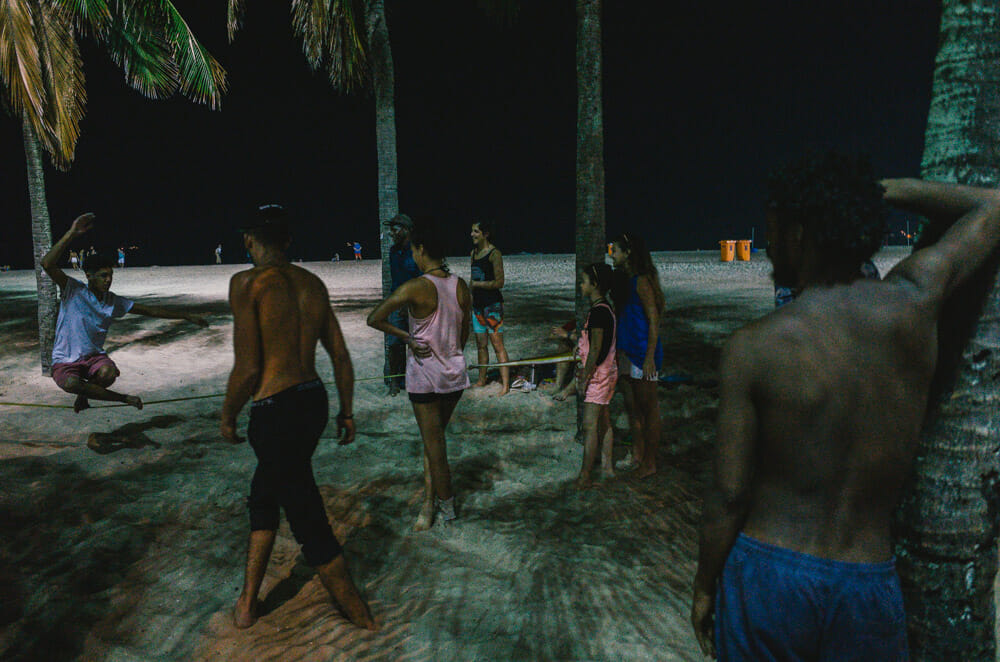